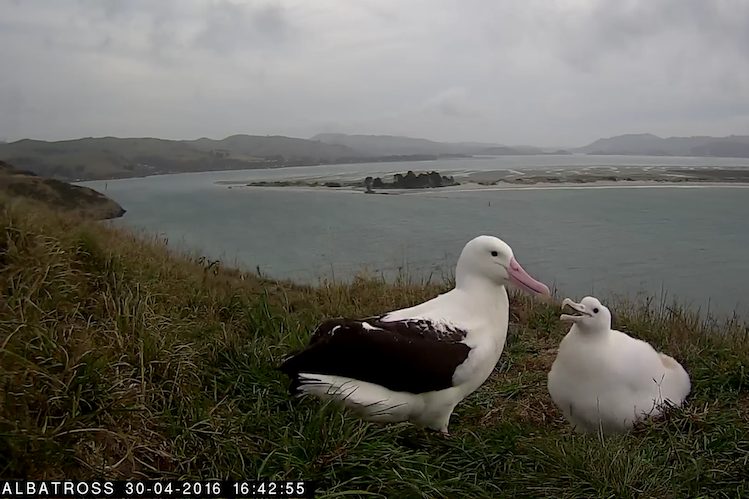 Albatross are solitary wanderers, covering vast distances over storm-lashed southern oceans, nesting on remote and inhospitable islands. They hold a place in our cultural imaginations as lonely and mysterious birds, at home in the wildest corners of the earth.

A small number of northern royal albatross (or toroa, their Māori name) have, however, chosen to make their home on the Otago Peninsula, a short drive from the New Zealand city of Dunedin—the only place in the world where albatross nest on an inhabited mainland. You can drive out to the Royal Albatross Centre on the peninsula, and look out for them arcing gracefully over the headland on those immense wings, a truly awe-inspiring sight.

This year, for the first time, we have been able to watch the domestic lives of these beautiful birds from the comfort of our own sofas. Since January, a webcam installed by New Zealand’s Department of Conservation (DOC) has been livestreaming the comings and goings at the nest of an albatross pair known as YWK and KGY (the initials refer to the colours of their bands) on the Otago Peninsula. 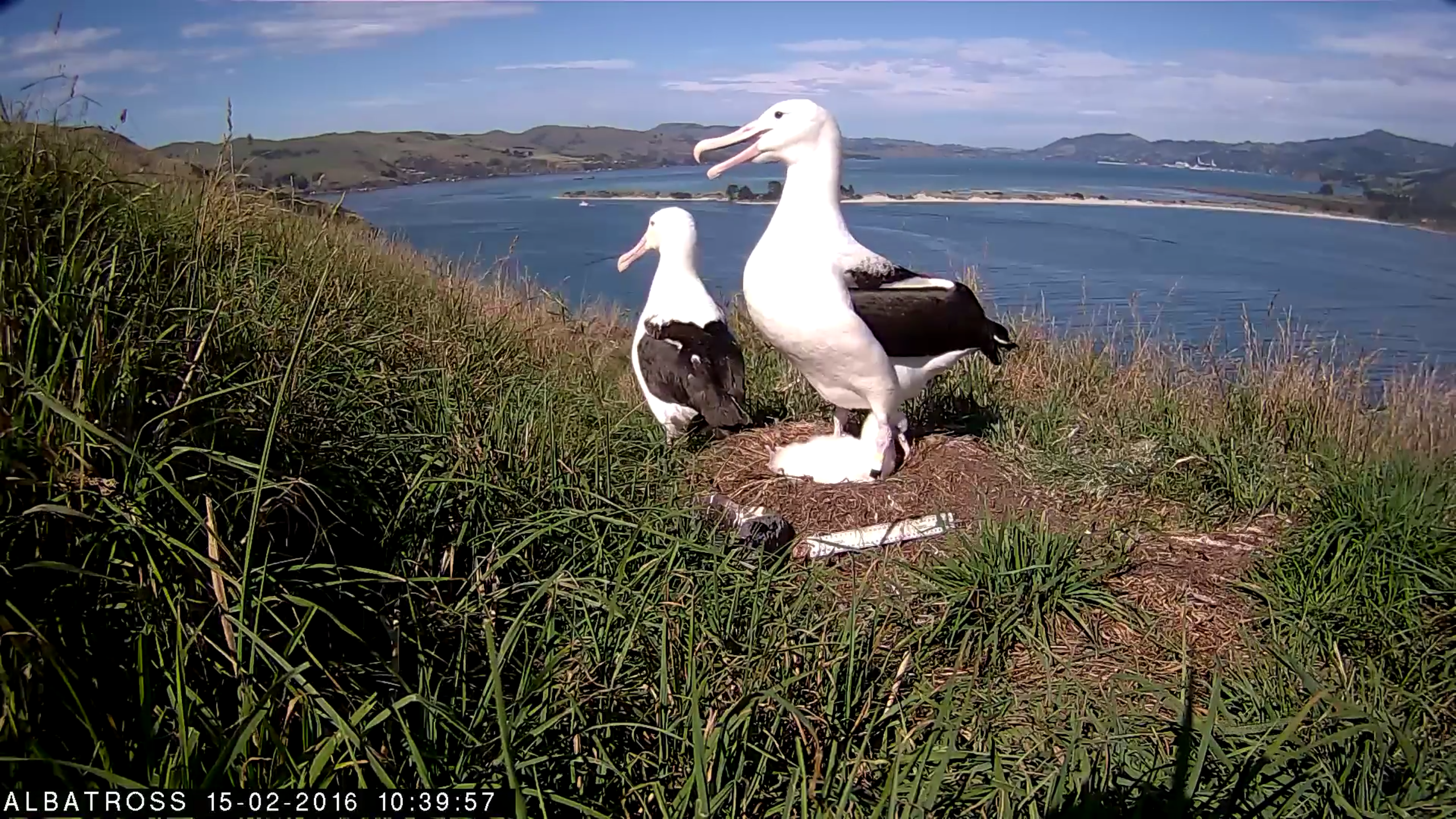 It’s been compelling viewing. At first, the webcam chick was mostly tucked out of sight beneath one of its parents. I kept the webcam open in a window at the corner of my computer screen at work. There was something very soothing about watching the parent bird sitting on its nest, looking out across the beautiful Otago Harbour at the passing cruise ships and container ships and little fishing boats, that helped put the pressures of work into perspective. The chick, when it appeared, pecking impatiently for food at its parent’s beak, seemed impossibly small with its fluffy feathers and tiny stubby wings. When the parent opened its beak to regurgitate food, the chick almost disappeared inside its mouth.

You could sometimes see other albatross wheeling in and out of view. I wondered if the parent got bored sitting on the nest, whether it was watching them with envy and dreaming of the open seas, waiting impatiently for the other parent to return and take over.

Some nights at home, I’d keep watching on my phone as the sun set over the hills, and the lights of Dunedin came on in the distance at the far end of the harbour, the albatross a barely distinguishable patch of light plumage in the gathering darkness. 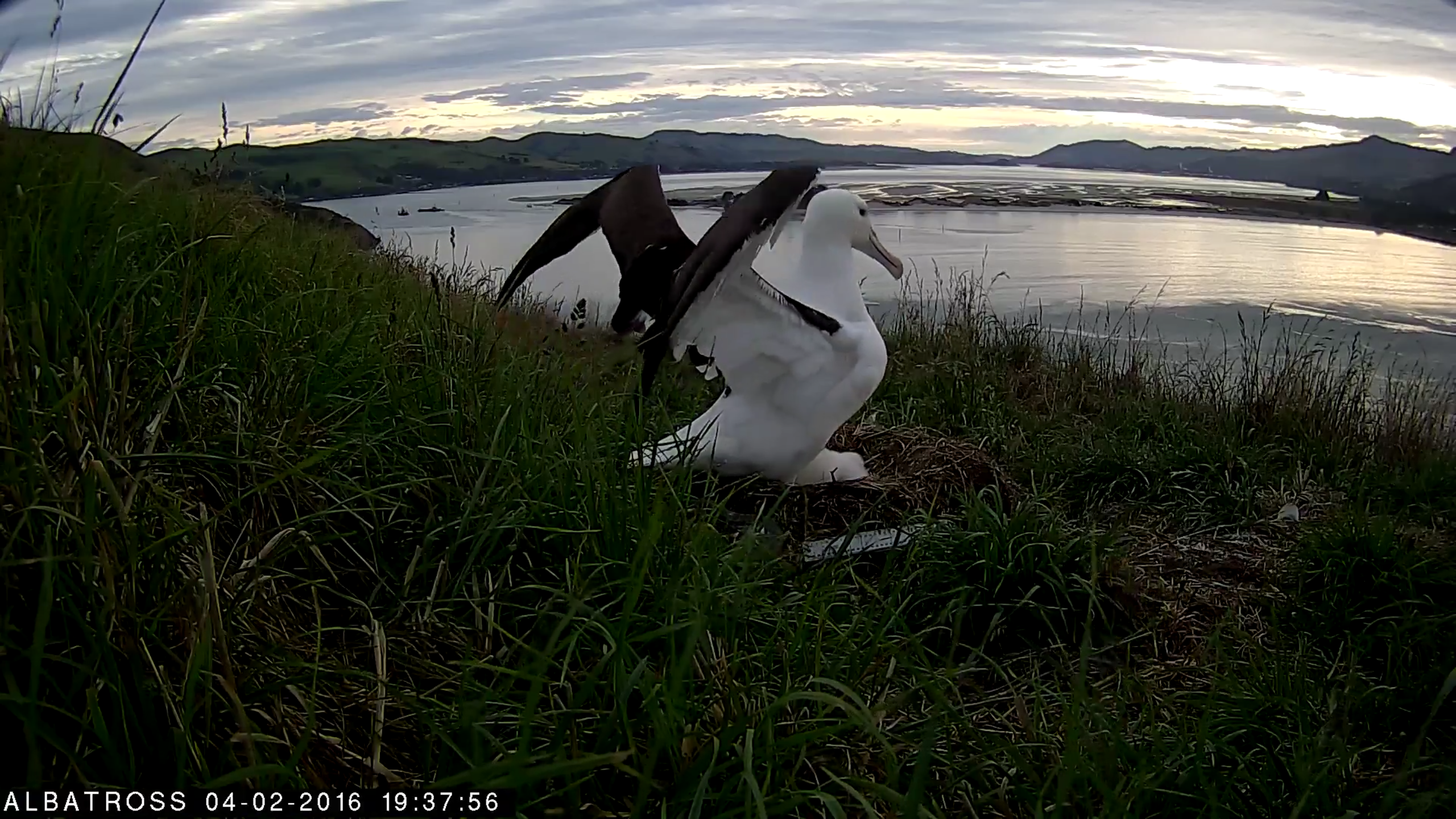 The webcam was harder to watch on hot summer days, when the albatross was clearly uncomfortable, panting with its beak open, standing up to cool the chick in the shadow cast by its body. When it got particularly hot, DOC staff set up water sprinklers to cool the birds down. I was surprised at first by the sprinklers—I’m not quite sure why, but maybe I was thinking of the webcam as a wildlife documentary where disease and death are part of the story.

But northern royal albatross are endangered birds that need all the help they can get, especially as their main breeding colonies in the Chatham Islands are still recovering from the devastating effects of a storm in 1985. It’s unlikely the Otago Peninsula colony would exist at all without ongoing human intervention, including the control of introduced predators such as stoats and cats. The colony started with a single nesting pair in the 1920s. Now, thanks to decades of conservation work by DOC and the Otago Peninsula Trust, the colony has grown to over 200 birds and nearly all of this year’s twenty-six chicks are expected to survive.

And we do go to extraordinary lengths to conserve our native birds in New Zealand, not least the heroic efforts that are being made to bring the kākāpō—a nocturnal, flightless parrot—back from the brink of extinction, efforts that include tracking every known member of the species via radio transmitters.

I watched as the webcam chick grew at a remarkable rate. It was starting to look increasingly crowded in the nest, the parent and chick fidgeting around each other. One morning, when the male parent was on the nest, he seemed particularly restless, standing up and sitting down, stretching out his wings and then folding them back, concertina-like, against his body. Finally, he stood up, left the nest, flapped his wings against the wind and was gone. The chick seemed to be calling after him, clattering its beak, and then it sat back, looking rather pleased about having the nest to itself.

I know I’m being anthropomorphic, projecting human emotions like boredom and a desire for independence onto the birds. I’m not the only one, judging from the webcam page on the DOC website, where people post screenshots of the chick with humorous captions. But then, I have no way of conceptualizing how a bird might think or feel other than through my human-ness. Try as I might, it’s impossible not to think of them as having feelings like ours when a parent and chick greet each other enthusiastically after days apart, or when the adult pair caress and preen each other tenderly with their beaks when they rendezvous at the nest. And then there are the adolescent birds, the rowdy teenagers, who gather at the colony on the lookout for a mate, hanging out and trying to impress each other. Sometimes the chick would be visited by one of them, stalking menacingly up to the nest and pulling roughly at the chick’s fluffy feathers like the class bully.

We have woven the beauty of these birds and their solitary ways into our stories: in western culture, the albatross brings to mind the “Rime of the Ancient Mariner” and its tale of guilt and penance for the crime of killing an albatross. For some Māori iwi (tribes), the albatross is associated with nobility and rank, while for others, it is a symbol of peace. In traditional Māori tukutuku woven panels, there is a pattern called roimata toroa (the tears of the albatross), a reference to a legend where two treasured albatross are sent to accompany a Māori ancestor on the long and hazardous journey from the homeland of Hawaiki to New Zealand. Once they reach New Zealand, the ancestor forgets about the birds and they cry tears of homesickness for Hawaiki. Albatross do indeed “cry,” although their tears are actually excess salt that they expel from their nostrils.

It strikes me that both the “Rime of the Ancient Mariner” and the roimata toroa story are about albatross suffering because of a lack of human care. Albatross are endangered now by our lack of care through activities such as longline fishing, and by the effects of climate change on the places where they nest. The intensive efforts to conserve native species in New Zealand are needed because of the devastating impacts of human activity on our unique natural environment. Stories like these with a message about caring for and valuing albatross and other creatures are more important now than ever. The kind of anthropomorphism inspired by watching the webcam seems to me to be about identifying and empathizing with the albatross, and empathy can be a form of care. Making albatross part of our culture and our stories (whether these are enduring legends or captioned screenshots), even though they may not be strictly scientific, makes it easier for us to value them. 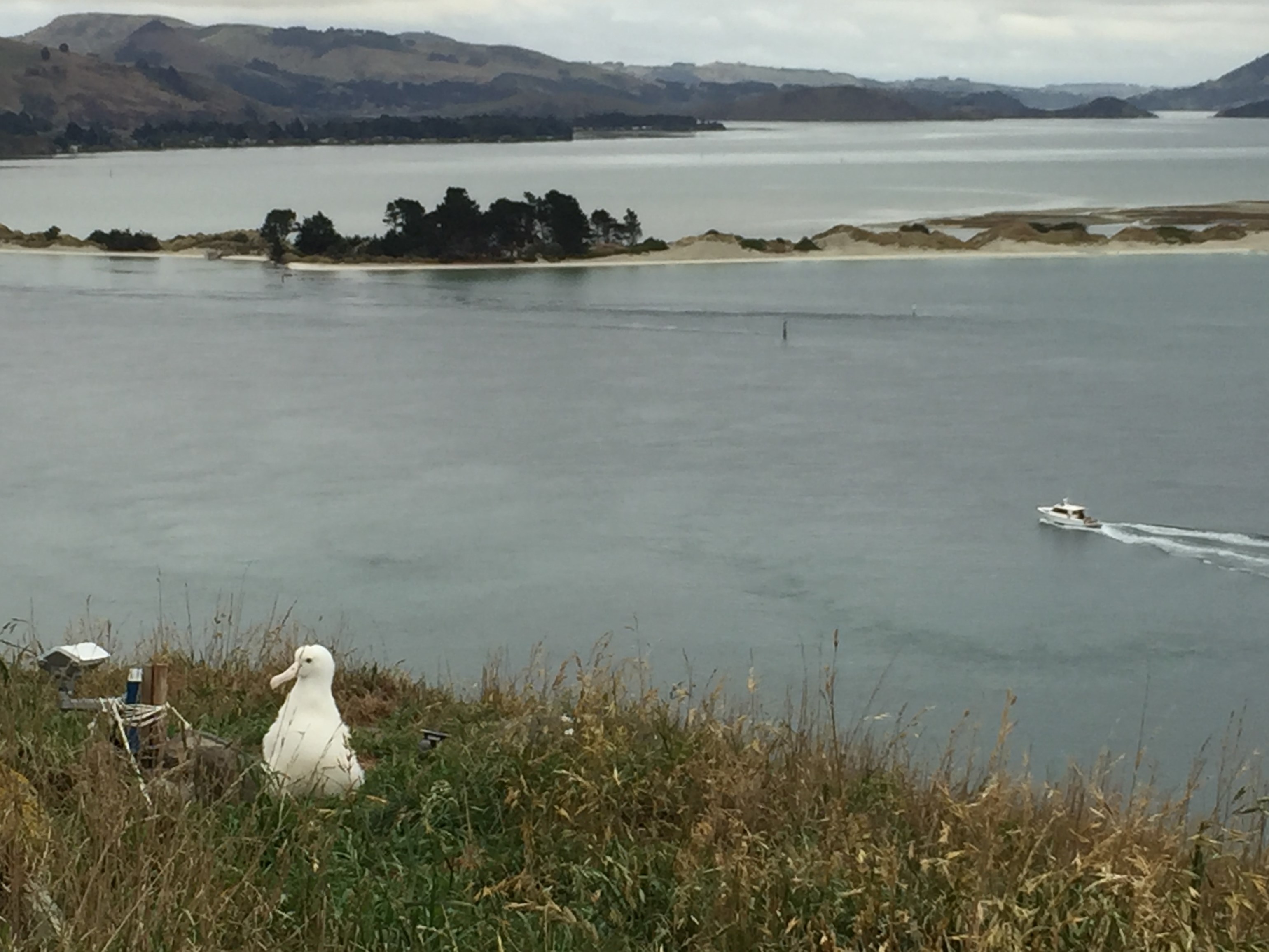 The chick is pretty large now, helped by a few extra feeds from the DOC staff. It looks at home on the hillside, spending more and more time outside the nest. The other day it stood up on its feet for the first time, after spending the past few weeks shuffling around on its backside, shifting its bulk awkwardly as it moved. Often it sits provocatively out of view of the webcam, although sometimes you can see its shadow or the top of its head. Its stubby wings have grown long and thin, but they are fluffy and ridiculous, like pipe cleaners. It’s hard to imagine that in just a few months the chick will be able to stretch them out, catch the wind and set off on a long solitary journey of its own—leaving behind its personal sprinkler system, an adoring audience, and a webcam trained on an empty nest.

Louise Slocombe lives in Wellington, New Zealand, a city of amazing views and birdlife, challenging topography and sometimes challenging weather. She writes about places and journeys and how we experience them. You can read more of her writing at http://risingtogale.com and find her on twitter as @carringtonia.