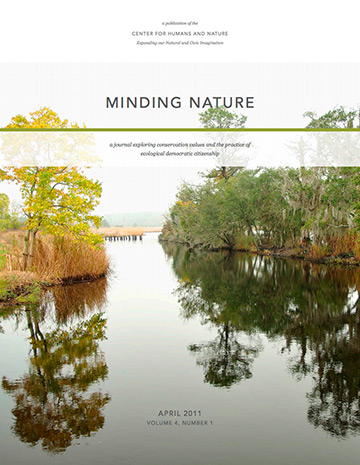 In Search of Lost Meaning, With No Time to Lose

I recently had the pleasure of attending a showing of Green Fire: Aldo Leopold and a Land Ethic for Our Time in Chicago. In the discussion period following the film, someone asked a pertinent and important question about why the film does not stress the problem of climate change. Now, climate change is mentioned in the movie, to be sure, but Green Fire is clearly not a reprise of An Inconvenient Truth.

Behind the Scenes in the Making of Green Fire

One of my fondest early memories is going to the theatre with my father to watch Walt Disney’s Jungle Book. To this day it is on my top-five list of favorite all-time mov­ies, along with Lonesome Dove, Searching for Bobby Fisher, and The Power of One. It is with some trepi­dation that I credit Disney with molding my interest, concern, and ethics toward the natural world, but giv­en the dates of my formative years and the typical sub­urban upbringing I had, the multi-national corpora­tion clearly did have an impact through this film.

Thich Nhat Hanh, the well-known Vietnam­ese Buddhist monk, is fond of suggesting that “there is no path to peace—peace is the path.” In this article, I pose a question that one likely encounters in a variety of forms if one walks the path of peace, which could also have been referred to by this Buddhist master as non-violence or ahimsa (non-harming).

The Influence of A.N. Whitehead on the Future of Ecological Economics

A century ago an influential movement in philosophy known as “logical positivism” effectively banished metaphysics from sci­ence, declaring such speculative thought meaningless. Many disciplines in the humanities fol­lowed this lead, including economics and political sci­ence. This rendered the connection between political economy and fundamental questions about the es­sence of the natural world invisible.

Knowing with One's Whole Being

Our modern consciousness and world view is derived from the Enlightenment period in seventeenth and eighteenth century Eu­rope. The Enlightenment movement and the resulting developments in Europe at that time re­organized society into distinct, interacting spheres: liberal governance based on reason and the interests of the people; capitalist economics as profit-oriented incentives and a market mechanism for meeting hu­man needs and satisfying desires; and science as the primary mode of explaining and understanding the physical environment, and as the foundation of all ra­tional knowledge.

On Common Ground: Stories of the ACE Basin

I’m frequently asked, “How can I see the ACE Basin?” Depending on who is asking, I suggest hiking at the Donnelley Wildlife Management Area or the Hollings ACE Basin National Wildlife Refuge, or canoeing on the Edisto River or on Cuckold’s Creek to the Combahee River, or birding on the edge of the ponds at the Bear Island Wildlife Management Area. For the adventurous, I recommend kayaking from Bennett’s Point to Otter Island, and for the less energetic, driving down Highway 17 from Jacksonboro to Gardens Corner.