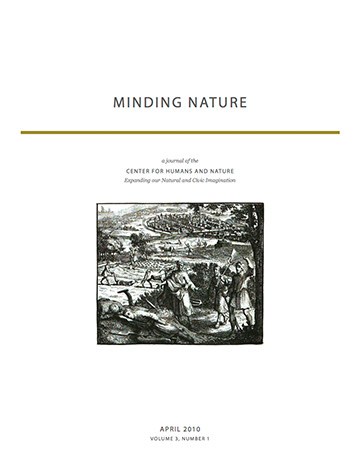 Inventing a New Language of Dissent

At a pivotal moment of Ian Mcewan’s new novel, Solar, the main character, Michael Beard, a Nobel Prize-winning physicist who is trying to promote a technology for artificial photosynthesis, gives the following speech to a group of pension fund managers . . .

Post Script to Avatar: Living World, I See You

One response to the 2009 James Cameron film Avatar stands out to me: depression—the unanticipated response of a sizeable segment of Avatar viewers who longed to live in a world like Pandora. Among others noting this response, CNN reported on the depressive effect the film had on thousands of viewers, drawn to blogging threads, such as, “Ways to cope with the depression of the dream of Pandora being intangible.”

Materializing Ethics: Shaping the Environments that Shape Us

In my 2003 book, Grounding Knowledge, I attempted to articulate in somewhat respectable philosophical terms a thesis that has largely escaped the notice of environmental thinkers. This is the thesis that the places in which a person dwells and the landscapes they call home can, on occasions, exert a subtle influence on the way they construct their understanding of the world. This is not the trivial claim that the world supplies much of the contents of our minds through our sensory faculties.

The Waste of Hope: Exploring the Crux of Utopia, History, & Ecology

“A world without utopian longings is forlorn,” writes historian Russell Jacoby. So is a world without history. So is a world without nature. Each of which, if incoming reports are true, are at their ends. If the world today seems forlorn, perhaps there is something worth discovering at their crux—at the intersection of utopia, history, and nature—that might help us to understand what is going on and help restore much-needed, fresh-grounded hope.

The Biosphere Ethics Initiative: Building Global Solidarity for the Future of Life

At the end of February 2010, I had the pleasure of representing the Center for Humans and Nature, alongside center Board Member George Rabb, at a development workshop and the formal launch of the Biosphere Ethics Initiative (BEI) at the Paris Museum Nationale d’Histoire Naturelle, co-hosted by the Center for Humans and Nature, the Ethics Specialist group of the International Union for Conservation of Nature (IUCN) Commission on Environmental Law (CEL), and the IUCN Comite Francais.

Synthetic biology looks poised to change the world in which we live in a manner that parallels the transformation brought about by synthetic chemistry a century ago. Within a few decades, products generated by synthetic biology could become as commonplace an element of our everyday lives as those from the chemical industry that shape all facets of our lives today—frequently in ways that are no longer consciously perceived.

Ethics or morality has to do with the principles, standards, rules, norms of conduct that make cooperation, justice, and freedom possible. Ethics is inseparable from questions of cultural meaning and social power; it provides a philosophically based touchstone for an ideal of justice, right relationship, and the proper use of power and authority.

Is it Time to Mourn Liberal Politics?

Despite the near decade and a half that has passed since its publication, this prescient book provides a fresh, if also virulent, perspective on our time. Its central argument is that embracing the central values of the Enlightenment—individualism, the separation of morals and politics, and the legitimatization of the conquest of nature—have backfired. Rather than the triumph of human virtue and achievement that can set us on the road to progress, we are on the road to a great ecological, economic, and political unraveling, the components of which Ophuls grimly but compellingly documents.