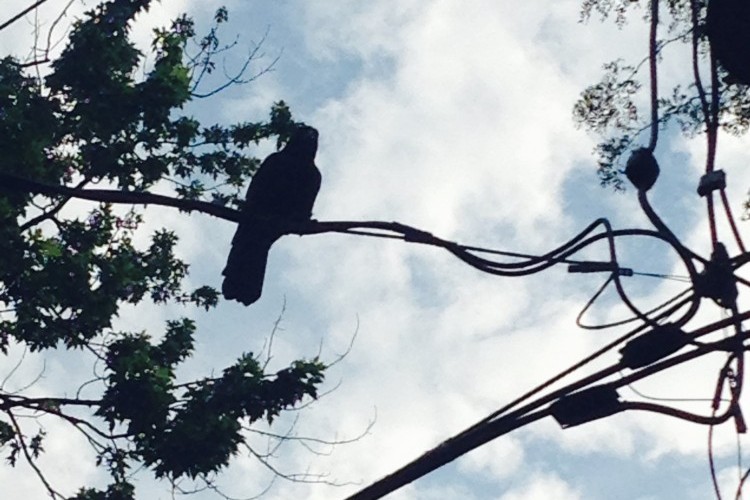 There are opportunities in the day to see, hear, touch the wild—even in the city, even as we hustle through our chores and appointed tasks, rush from destination to destination, or monitor our flood of electronic communications. But we must be open to them—willing to stop, to look around and listen carefully—even if only for a few moments.

And while it's immensely gratifying to witness a charismatic or rare species in action within the urban landscape—like a fleeting glimpse of a beautiful red fox skulking between the shrubs of a suburban ranch home, or this highly unusual sighting of a Snowy Owl here in my hometown of Joliet—I particularly value the mundane encounters we can have with common and familiar species. Like house sparrows frisking and bathing in a sidewalk puddle, or crows chattering in my neighbors' trees.

Children are good companions for such explorations. Yes, they can be noisy, and that'll scare some critters away. But they're skilled at dawdling and dinking around. They don't care much about walking with clear direction and purpose. They like to look at stuff, and hear stories about it. They're easily distracted. And in searching for the wild in the city, all these things can work to the wonderful advantage of harried adults who themselves could stand to slow down a bit . . . and just look.

Several years ago, while visiting good friends in Chicago's West Ridge neighborhood, our two families took a stroll to Indian Boundary Park, one of the city's gems among its many small parklands. Our friends' little boy, Ewan, was your typically rambunctious four-year-old at the time, full of energy and prone to loud exclamations. As we walked through the park, the adults chit-chatting busily and the kids running and skipping along, we approached our favorite tree—an enormous cottonwood that towered between the park's small zoo and its sprawling playground.

As I remarked on the tree's many virtues, Ewan suddenly got quiet, then walked up to the tree. I said encouragingly, "Feel that rough bark. Isn't it wonderful?" He touched the tree, then said, "Oh, here's something. Look."

I looked, stunned. It was a little brown bat, Myotis lucifugus, hanging upside down (or should I say, right-side down?) within a deep fissure of the bark. Yes, the brown bat is a commonplace species here in Illinois. But had I ever seen one in this park, a place I had visited hundreds of times over a period of years? No—not until Ewan had found one so effortlessly that day. I hope he still remembers that moment, for I know I'll never forget it.

Lately my opportunities for chance wildlife encounters with my kids are harder to come by, compared to last year when we homeschooled our fourth-grader and had our younger daughter attend a nature-based preschool two mornings a week at Joliet's splendid urban woodland, Pilcher Park. Then, we had more time for long rambles and plain old poking around. Now, with both children back in school five days a week, with music lessons and homework, there's far less time for getting out to explore the world.

So my wife and I try to take an opportunity, when it comes, to go outside, to look around, even if just in our backyard or on a short walk around the block. We take what's there, and relish the small and (seemingly) insignificant encounter. Like the one Laura and the girls had with a murder of crows on a damp afternoon in Joliet this past December when I was at work in Chicago.

Through a cracked-open window in the kitchen, Laura heard some raspy cawing—and when she realized crows were roosted in the trees surrounding our yard and along the back alley, she got the girls into their coats and hustled them outside. The chattering and squawking of crows are sounds that delight and encourage us, after many years of our hardly seeing this once ubiquitous city bird that was particularly hard hit by the West Nile virus. (Fortunately the crows have made a bit of a comeback here in northern Illinois.)

The girls stood quietly in the alley, amongst some large pines and sycamores where dozens of crows were murmuring and clicking to one another. Occasionally one would flit from one tree to the next, settling down on a new branch with one or two strong flaps of wing, and offer a brief greeting to his new neighbor. Then, suddenly, the crows tore off to another cluster of trees a few houses down the block . . . and so Laura and the girls followed quietly, noticing the utter quiet in the neighborhood as dusk came early on this short winter day. With not another person in sight, they felt quite alone here in our city neighborhood, possessed of secret knowledge of the crows.

When I came home soon afterward, they greeted me in the kitchen with breathless stories of their Great Crow Adventure. I pretended to be sad I missed it; but secretly, I was thrilled for them—especially when I read the poem Lily had dashed off after coming back to the house. It seems a fitting end for this little essay.

Michael Bryson is Professor of Humanities & Sustainability Studies at Roosevelt University and a Research Associate in Science and Education at the Field Museum of Natural History, both in Chicago, Illinois.