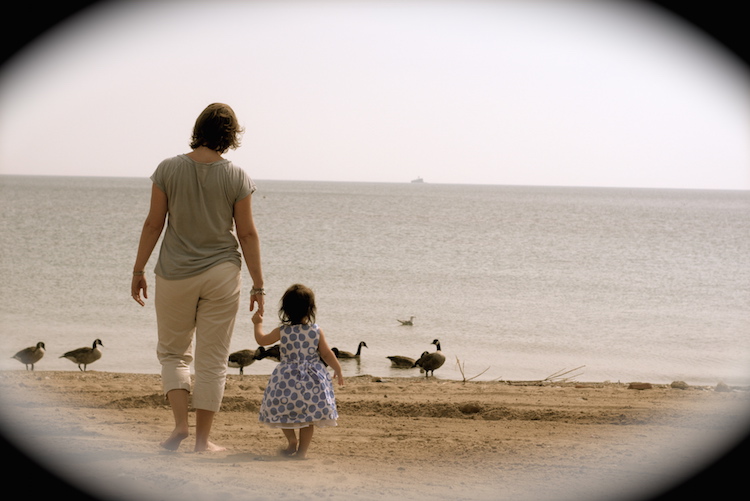 “Well, that museum is great for kids, but have you checked out the little baby ducks in the Botany Pond yet?”

While researching Chicago neighborhoods to create a children’s book of maps, I received this well-meaning advice but chalked it up to a fellow animal lover with a soft spot for our furry and winged neighbors.

But it kept happening in other neighborhoods throughout the city.

In Rogers Park, two longtime residents showed me the Dune Restoration Project, where native pollinators have returned to do the work that was undone through years of human development along the lakeshore.

Lincoln Park residents wanted me to experience the Alfred Caldwell Lily Pool where turtles surface for a breath to the delight of families observing them from the rocks. 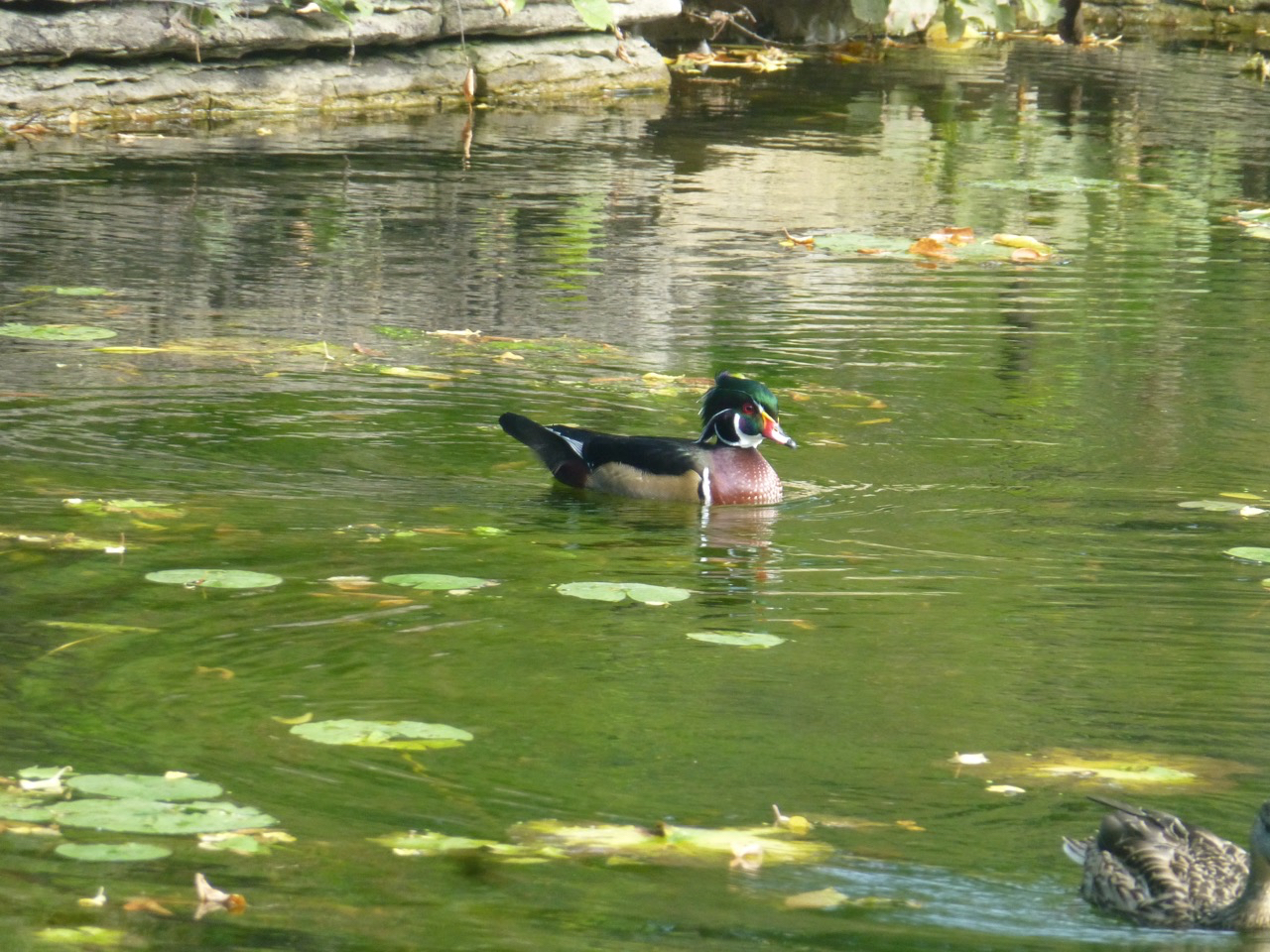 And in Hyde Park, every human family I met wanted to tell me about the little families of ducks that come back year after year to raise their ducklings in the Botany Pond at the University of Chicago.

I went into each neighborhood to ask what made that place special, interesting, and unique. To say I wasn’t expecting these kinds of answers is an understatement. Armed with months of research on each Chicago neighborhood’s architecture, history, demographics, museums, and restaurants, I had expected a barrage of recommendations on things to do or places to eat. Yet almost to a person, each resident found a way to weave in the story of his or her own encounters with animals and the best spots to observe them. I’m glad I allowed the residents to tell me these tales and that I got to see the places firsthand.

These stories of animal encounters made me think about my own life as an urban parent, and the way that my family gets excited about the animals that make their homes in our neighborhood. Looking west from our condo’s windows, we have watched coyotes roam the 72-acre expanse of prime real estate that has somehow evaded development during our neighborhood’s population explosion of the last decade. In March, their lean brown bodies stand out starkly against the snow cover. One spring, we saw two of them so many times that we named them—Wiley and Winona. Each time signs of development crop up within the land, the kids turn to me in fright: “But what about Wiley and Winona? Where will they live?”

Or I reflect on the times when our lives have intersected with those of urban animals in ways that were more surprising, or even disturbing. There was the giant possum we saw in Harrison Park that prompted a conversation with Spanish-speaking residents about whether or not the creature really was a tlacuache given his large size. There are also the dead migratory song birds we find next to the building every fall—moments that fill us with sorrow—their journey south cut short by their confusion with our city’s bright lights and reflections.

Most of the time, however, my own encounters evoke that same sense of wonder and appreciation that the residents of various neighborhoods expressed when they told me where to find their animal “neighbors.” I had to honor these recommendations. Between the historic landmarks and restaurants, each animal neighbor I heard about is depicted in the book: colorful, possibly surprising, and personal. 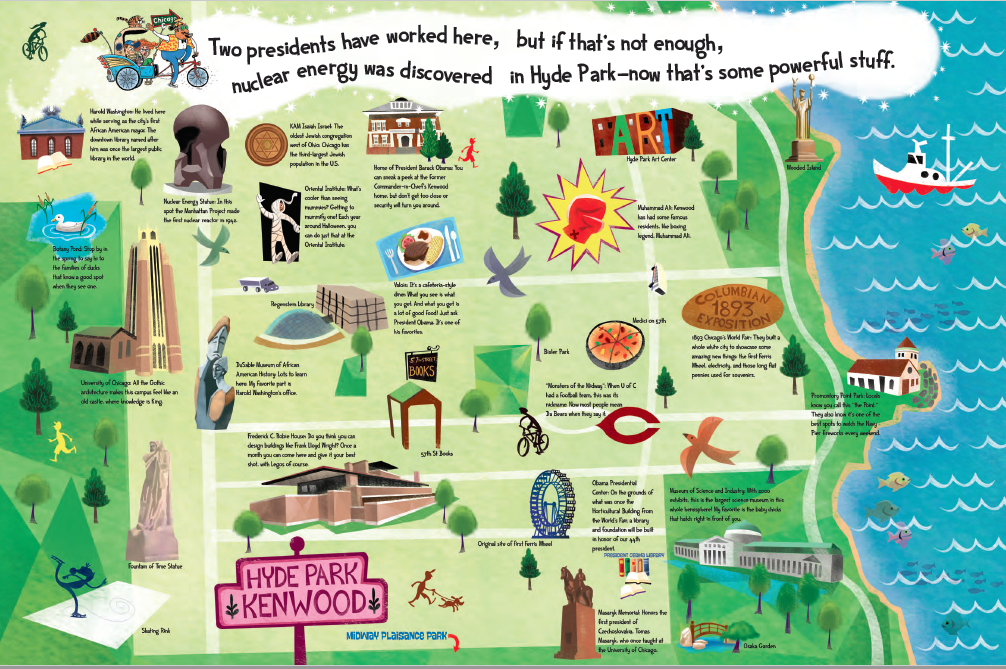 These pockets of the natural world that coexist with us in our “Urbs in Horto”—or city in a garden—remind us that we are still part of a larger ecosystem, one that existed long before our highways and railways sliced and diced their way through it. Maybe they remind us that we’re not so far from the natural world as our busy city lives might lead us to believe. Watching a mother duck paddle around a pond with her little ducklings in tow becomes a Zen-like respite, a moment of quiet simplicity away from the city’s noise. Meanwhile, coyote neighbors chase rabbits across the wide prairie much as they might have before any settlers landed on Lake Michigan’s shores.

Maybe there’s something more, too. There’s a comfort in knowing that these animals stay here, find their way here, and in some cases keep coming back here year after year, despite the obvious perils and threats to their safety in the midst of our big, reflective buildings and encroaching development. There’s affirmation of the city’s potential to nurture young life in knowing that the mother duck on the Botany Pond chose that spot to raise her young. And if she chose this neighborhood, then so can we.

Kathleen Dragan is the author of Rickshaw Reggie from Reedy Press. You can find her at rickshawreggie.com or on Instagram @RickshawReggie. She is proud to call Chicago home.