Earlier today, out at the oxbow on Salmon Creek, a spawned-out steelhead salmon came skittering downstream all quiver and thrust and twist. I had just turned to look west, thinking, they should be coming home by now, and then—the splash. Well, here you are. Welcome old friend. It’s February and the steelhead are in the creeks.

Tramping the backstreets of my village under the new moon this February night, I think of the history of salmon. By the time our earliest ancestors walked upright onto the plains of the Great Rift Valley, the ancestor salmon was already evolving into an anadromous fish born in freshwater that migrates to the sea and returns to spawn in the stream where it was born. Eons have gone by, and I pass houses lit by electric lights, hear dogs barking from fenced yards and the voices of children from open windows. I think of Australopithecus afarensis, a mother and child, Mary Leakey supposed, their footprints evenly spaced as if they had been holding hands.

The night is balmy with false spring, and the new moon rides the horizon—a cradle of light in a vast, dark sea. Was there a moon above the lake the night before the two of them walked out across the warm, wet ground? What constellations drifted overhead? Or were the moon and stars veiled by a gauzy rain? Generations later, by the middle Paleolithic, salmon and Homo sapiens were co-evolving in a dance that persists to this day, though most of us have forgotten.

Dance for us, Oh Swimmer
As we dance for you
With our stamp and our sway
With our shells and our beads

While Europe was frozen under a sheet of ice a mile thick during the last great Ice Age, people migrated south until they were concentrated in the glacial refugium of northern Spain and southern France. They settled along the rivers where there were salmon. And they fished. It has been said that Homo sapiens would not have survived the Pleistocene had it not been for the salmon, whose annual returns gave sustenance and nurtured trust in the cycles of life.

Welcome home, Leaper, Weaver
Of worlds. We knew your father
Your grandmother knew our grandmother
They were sisters (swish-whisper 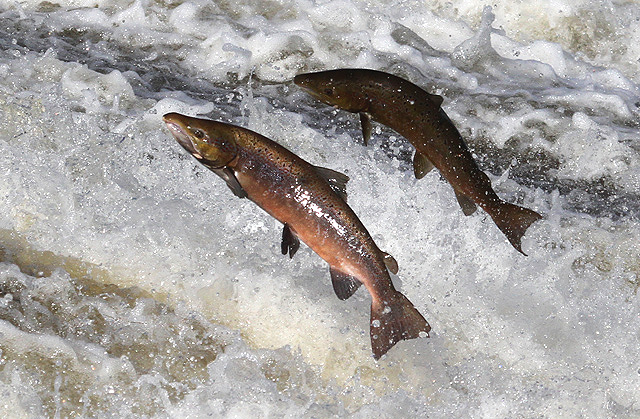 Thousands of years passed as generations succeeded each other while the salmon, millions of years older, continued evolving. Before the first settlements peppered Europe, modern salmon were leaping waterfalls and glimmering in the deep pools of the rivers.

Walking now under the moon’s pale crescent, I think of the people those ages ago, gathered around their fires, telling jokes and stories and singing of the salmon return. The children would fall asleep under bear and deerskin blankets, reliving the salmon dance, their dreams filled with songs and stories of salmon.

Welcome home, Leaper—
Our children are your children (swish-whisper)
They shared the same feast (stamp-stamp)

What was it really like in the days when my Celtic forbearers gathered around their fires to smoke salmon, chanting and singing salmon songs passed down through generations just as the Miwok and Pomo people did here on the California coast, where there were Salmon Singers, whose task it was to call the salmon home.

Come home, Great Swimmer
With our shells and our beads
We welcome you
Your children are our children

Their role as participants in the renewal of the world would have been clear to our ancestors. Through song and ceremony and ordinary moments of gratitude, acknowledgment of the salmon as a source of food and spirit-strength has been celebrated for thousands of years. From schools of fry to a dangerous journey downstream to salt water, from years of solitary ocean wandering to an exhausting journey home to natal waters—where they mate and spawn and die, the nutrients of their bodies returning in plants and insects to nourish succeeding generations—the long adventure of salmon illustrates the most significant polarities of existence: individual and community, male and female, body and spirit, death and immortality. The life cycle of salmon gave people a living image of the fusion of opposites from which soul wisdom emerges.

Today we buy salmon at the counter or order it in a restaurant and rarely think of the story of our old companions. But having forgotten their story and lost the recognition of our accountability in their survival,we have lost the thread of wisdom gained through reverence. We no longer remember the prayers and praises by which The People gave back in gratitude. We no longer think to return the bones of salmon to their natal streams to replenish the watershed.We have broken the ancestral ties that were a constant reminder of our interdependence.

Can we restore those ties? Can we realign with the wisdom of our ancestors and be even more inclusive? Can we hold an awareness of place-centered culture when we live in a globalized world? Can we find and share practices that recognize the sacredness of life and our responsibility in sustaining it? That is our task if we are to be ancestors to a future where Earth flourishes and where our old companions, the salmon, flourish with us. To honor them is to join those who came before and to participate in the future yet unborn.

The moon has dropped below the horizon when I open the gate, home from my rambles. I think of the salmon coming home after their long sea journey and see again the steelhead, ecstatic and half-out-of-water, shoot past me. Who could see such a thing and not feel gratitude? Who would not be comforted by the joy of a kindred creature? Who would not feel a thrill of hope?

Welcome home, Weaver of worlds,
Ember in the shadows,
Fire that never goes out, Leaper
Weaver of Worlds
Our grandchildren are your grandchildren
(swish-whisper stamp-stamp)

Elizabeth Carothers Herron, author and educator, writes poetry and articles on art and ecology, the role of art in society, and the importance of natural systems and biodiversity in the physical and spiritual well-being of individuals, communities, and the planet.

14 Contributor Responses
What kind of ancestor do you want to be?

Winona LaDuke at the 2017 Geography of Hope gathering