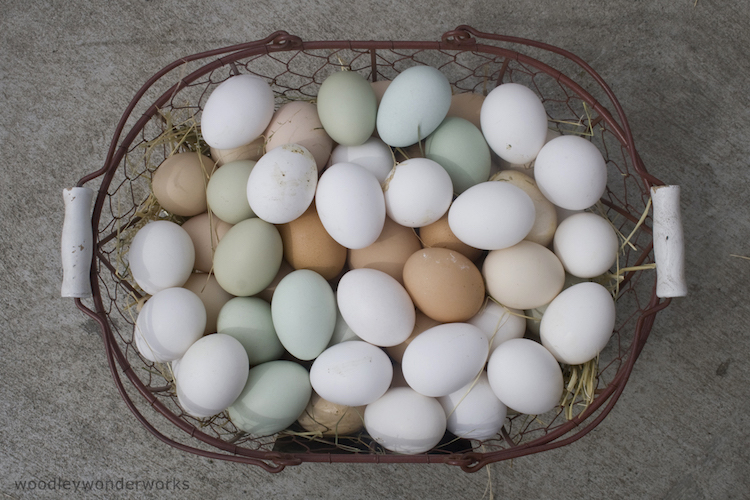 When I reached Cherith Brook Catholic Worker House in Kansas City, Missouri, I did not expect to see chickens loose on the driveway. I’m not sure why I was so surprised—other urban Catholic worker communities I visited had backyard chickens. But it was a dreary day in a dreary neighborhood, and I had driven through the east side of Kansas City, with little sign of animal life or greenery. Cherith Brook’s chickens, gardens, and beehives were an oasis of nature on their city block. 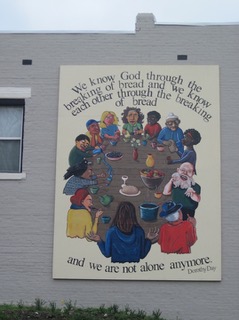 I had come to the Cherith Brook community to conduct research for my book Living Sustainably: What Intentional Communities Can Teach Us About Democracy, Simplicity, and Nonviolence. I had been visiting intentional communities, such as eco-villages and Catholic worker houses and farms, to see how they integrated sustainability and nonviolence into their daily lives, and I was especially curious about urban communities. The chickens, as it turned out, helped me understand how the residents of Cherith Brook practiced their core values of nonviolence, hospitality, revaluing land and labor, community, and downward mobility.

To learn more, I volunteered in their hospitality mission. So, for several days, I did laundry, served food, and worked in the garden—whatever they needed at any given moment. I worked side by side with other volunteers, some of whom were also guests and relied on Cherith Brook for means and clothing. One volunteer said he had been displaced due to a fire, and I saw how easily one could slip into homelessness. Two men I met while volunteering told me that they regularly care for the chickens, each responsible for two days per week. They enjoyed caring for the chickens, and I could see why. Caring for these chickens was probably one of their few opportunities to bond with animals. 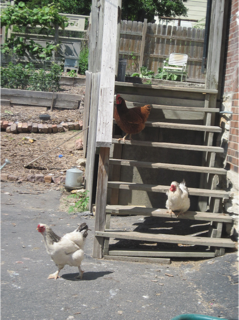 Cherith Brook’s backyard—a natural oasis—offered a respite from the surrounding urban neighborhood. The community has established extensive gardens and beehives around their two-building property, and the chickens live in two coops in the large space between the buildings.  The workers have set up rain barrels to irrigate the gardens and hung painted wooden doors to serve as a fence to demarcate their yard. “Revaluing land and labor” is one of Cherith Brook’s core values, described on their webpage as

to rediscover our original connection with the goodness of God’s handiwork, the proper meaning of labor and self-sufficiency, our intimate connection with nature, the need to steward native resources and discern appropriate technology—all to celebrate the sublime mystery of God’s creation (Genesis 2:4-9, 15-16, “Aims and Means.”) 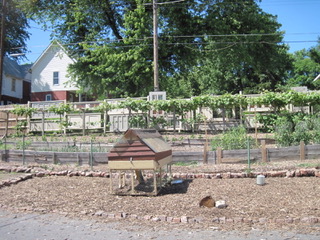 The chickens and the bees were indeed “city creatures” and helped residents, guests, and volunteers sustain or re-establish connections with the natural world in this urban setting.

The Catholic workers at Cherith Brook emphasized nonviolence towards other people and towards the natural world, so I wondered about the relationship between meat and nonviolence. As part of their hospitality mission, Cherith Brook serves breakfast five mornings a week and the meals I helped prepare all included meat. I never asked the men responsible for feeding the chickens if they viewed the chickens as potential food, although I knew that the community used the eggs for breakfast. One man had come from a farm family and was well aware of the reality of eating, that something—fish, animal, or vegetable—must die so that we might eat.

One afternoon I worked in the gardens with Elizabeth, a Cherith Brook resident. We sat in the front yard on a sunny day, first preparing the garden bed, then planting seedlings, and we talked about meat, nonviolence, and Cherith Brook’s hospitality mission. She told me that while some Cherith Brook residents and volunteers themselves prefer a vegetarian diet, most of their guests want meat. Their guests, she said, see meat as a luxury, a rich person’s food, and the guests appreciated the opportunity to eat typical American meals. The residents of Cherith Brook aim to create a solidarity with the poor and with the people they serve, and downward mobility is a stated goal.

Meat brings up a tension between values of vegetarianism and hospitality; some environmentally inclined people are vegetarian because meat production places such heavy demands on land and water resources. Elizabeth worried that when residents and volunteers do not eat the meat, their guests might perceive this choice as a sort of snobbery, as in “Isn’t our food good enough for you?” To truly be in solidarity with the poor and their guests, they must eat what is served, suffering the same choices, or lack thereof, as their guests. Resident Eric Garbison recognized the tensions between fellowship and vegetarianism and said that he saw opportunities to “witness both practices with grace and mercy. They [the residents of Cherith Brook] are called to serve and offer choices to those who have few choices.” He continued,

In solidarity with our street friends, I eat what is present. Solidarity is transformative for all of us, so I will eat dumpstered supreme pizza if that is what is available.

Anthropologist Claude Levi-Strauss is credited with the phrase “animals are good to think with,” and Cherith Brook’s chickens prompted me to think about tensions between vegetarianism, hospitality, and nonviolence. I saw how Cherith Brook’s gardens, chickens, and bees helped the community fulfill some of their core goals, especially those related to sustainability and connections to the natural world. At the same time, residents had to balance competing values in service of their goals of fellowship and solidarity with the poor. Nonetheless, in their block of Kansas City, Missouri, Cherith Brook created a space and a habitat that welcomed all members of the biotic community. 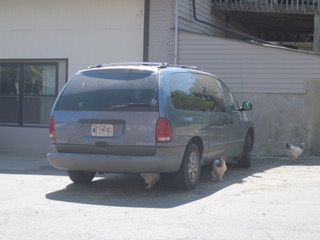 Before I left Cherith Brook, I walked through the backyard, to see the bees and gardens and especially to say goodbye to the chickens. As they clucked about the yard, I thought of possibilities for solidarity in the city—between humans, and between humans and nonhumans. It occurred to me as I wished the chickens well that some measure of the “sublime mystery” of solidarity was pecking and scratching a few feet from where I stood.

Whitney Sanford is a professor in the Religion Department at the University of Florida, specializing in Religion and Nature. She recently published Living Sustainably: What Intentional Communities Can Teach Us About Democracy, Simplicity, and Nonviolence (University Press of Kentucky, 2017). She is currently conducting ethnographic research on the river people of Florida.