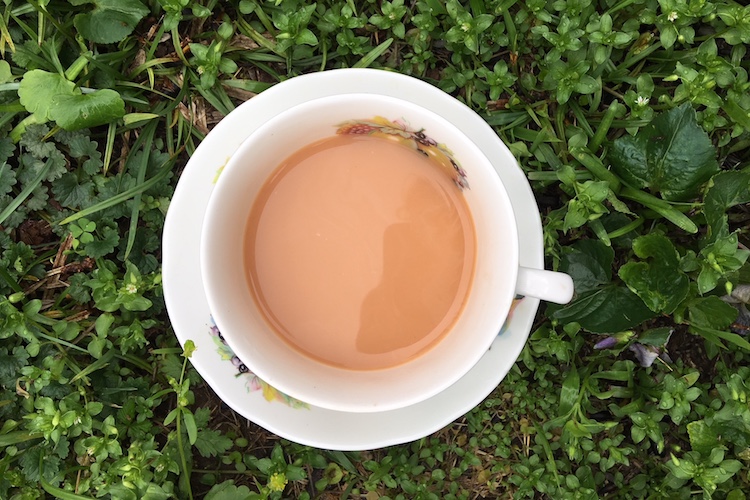 I think I’ve solved a mystery. Or at least identified the victim in a mystery.

One morning a few years ago, I walked into the kitchen and, as usual, met all the dishes I had not washed the night before. Among these was my favorite teacup: a jumbo “breakfast” size Royal Duchy pattern so wide it holds twice the volume of an ordinary teacup. The cup was still half-full, and was still that warm palomino color you get when you dollop whole milk into black tea—call it buff or wheat or maybe a golden caramel. And on that lovely richness floated a horror that woke me faster than could any caffeine. Spread-eagled atop the tea, with all eight legs stretched as if to tiptoe the porcelain sides—as if spokes of a hairy wheel—was a spider. Huge. Dead. It (He? She? I didn’t know enough to wonder) had bumbled into my cup during the night and drowned.

My first thought was “Where is the rest of the spider’s family?” because I had never seen a spider that big inside the house or out, and I did not want to see another. Not that I hate spiders. I don’t even hate brown recluses, because, so far, they keep themselves to themselves. We live amicably with comb-footed spiders, jumping spiders, cellar spiders, spitting spiders (they spit venomous silk!), and so on; spiders who range in size from nearly too small to see, up to the funnel spiders in the window sash. Funnel types can get fairly large, but nowhere near the size of an ordinary teacup. (Demitasse, yes.) And the comforting thing about funnel spiders is the funnel: the spider spins it and pretty much stays there to wait for prey. As opposed to stalking through our home and falling into teacups.

I froze. No one else was awake. What to do with a jumbo breakfast-cup of spider? Where is “away” enough to throw? Trash? No. Toilet? No. I unlocked the back door, and whisked the cup at arm’s length (lest the spider magically revive?) to the yard, where I tipped it onto weeds.

I never did tell the kids. And I didn’t use the cup again for months. And from that day I have never been tempted to ingest anything left unattended overnight. I even peek inside the teakettle before adding water. You never know who might be in there.

Then, this May, while pottering in the yard, I looked up to see a spider very like my teacup spider but smaller. And alive: resting on the side of a gatepost. When I got too close, the spider scooted off, but I snapped a blurry photo decent enough to confirm a fishing spider: Dolomedes tenebrosus. 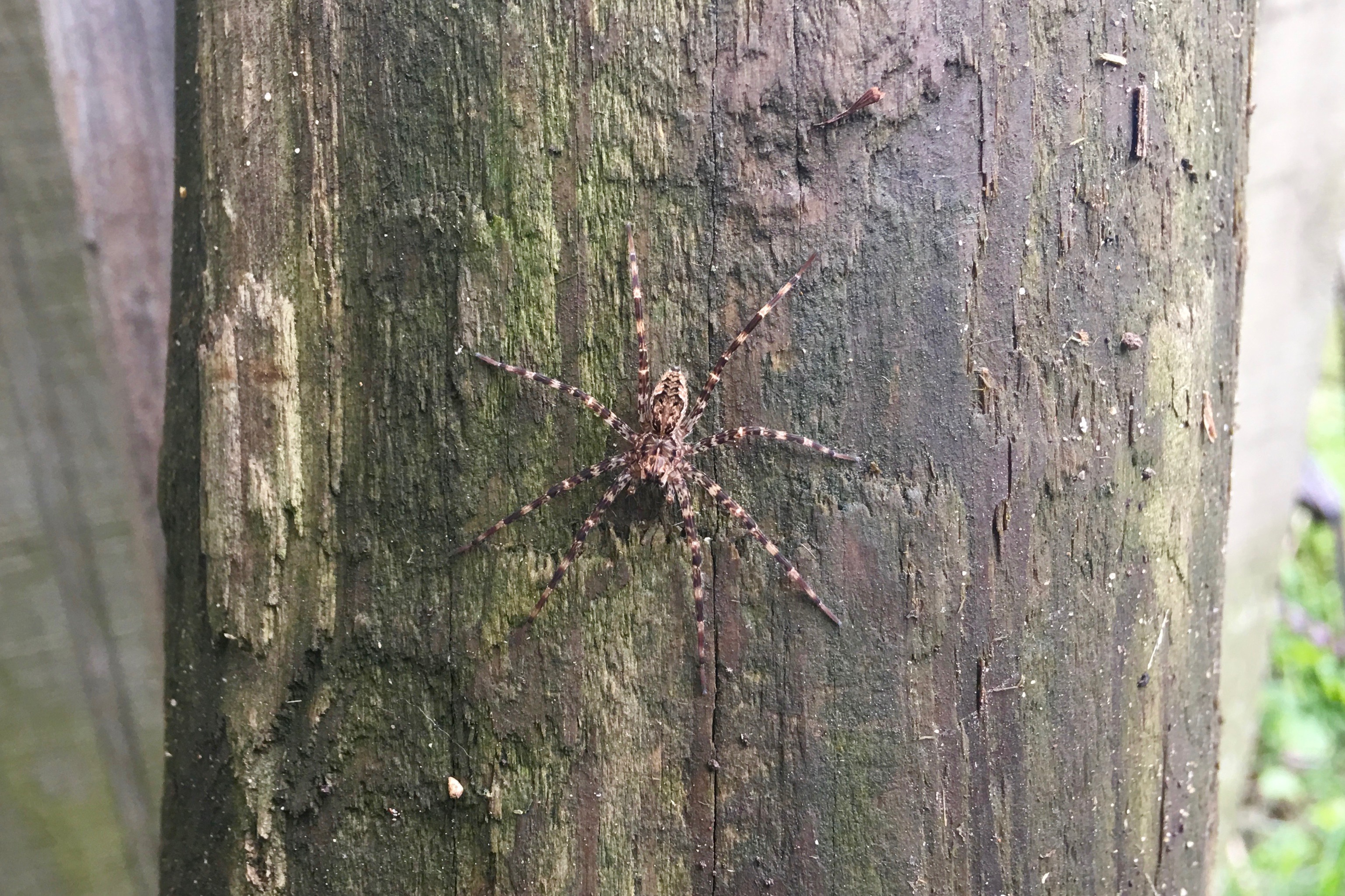 Tenebrosus means dark, which is fair, so to speak: the spiders are rather dark, as is my kitchen at night. It also means gloomy. I feel distinctly gloomy when fishing spiders die in my tea. Dolomedes seems a bit judgy though: it means wily or crafty, as in skilled at taking advantage by means of deceit. But doesn’t any hunter have to be wily or crafty if they wish to eat?

Fishing spiders can fish—can actually catch small fish and other aquatic creatures—can skate on water and can dive for short periods. The leg hair repels water. I had assumed they only lived near water, but, despite the name, they live more often in and near trees, and are a common suburban “household invader.” They are also usually found on vertical surfaces, such as the one on the gatepost, rather than flat on the ground (or flat in a teacup). I’ve read that May is when young spiders mature and mate. Mine on the post is likely female, still growing. Females can grow to about three inches across (legs included). Males are smaller and do not survive mating.

Did the tea and milk mess with the hydrophobic leg hair?

If it had been just water, would the spider have been able to enjoy a dip, yet continue the evening’s work?

Or was the problem the china itself? Did the teacup’s slick curves prevent any of the eight legs from grabbing a hold back up to the rim?

And what was she (yes, she!) doing in the cup in the first place? I assume she was on a nocturnal hunt. I often find small, flying insects in wet countertop dishes, so maybe the fishing spider saw a nice meal waiting on my tea?

Lazy housekeeping killed not only an enormous predator, but the predator’s itty bit of prey as well. Who was the “household invader” now?

My spider mystery is another reminder that none of us is alone, no matter how tight the sashes and how clean the countertops. For more than twenty years my family has lived in this house, and I still meet new neighbors inside it. Some, I’ll live with; some, I’ll relocate. But even though they are not invited, each one is worthy of our wonder and at least a cursory investigation.

Who will be next? What will I learn?

Not to be tidier, obviously. Because if a giant spider in a teacup doesn’t make me wash the dishes before I go to bed, whatever will?

Joanna Brichetto is a naturalist in Nashville, where she writes the urban nature blog Look Around: Nearby Nature. Her essays have appeared in Hippocampus, The Hopper, storySouth, The Ilanot Review, About Place Journal, Longleaf Review, Vine Leaves Literary Journal, and The Fourth River.