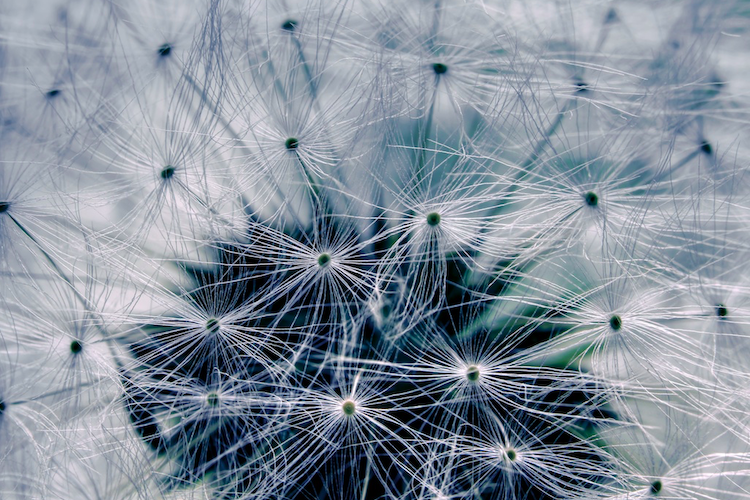 A dancer, a teacher of tai chi, and a rabbi go for a walk in the woods. This sounds like the setup for a joke, but it’s actually the beginning of an experiment in ecological culture.

As it is becoming ever clearer that the greatest challenges to our environmental crises are cultural, it seems entirely called-for to explore cultural technologies that create functional relationships between humans and nature. For a long time I have been interested in applying embodied practices to ecology, and for the last few years I’ve been doing informal experiments in urban wild spaces to see what happens when we give deliberate attention to the sense perceptions, feelings, and meanings that arise from our interactions with the living world. I’d like to share the results of my most recent investigation, to inspire others to do their own explorations.

It’s not exaggerating to say that in the last few decades there has been a radical shift in the scientific consensus about living processes. With new instrumentation, observations, and mathematical models, we now recognize the crucial role of embodied interactions, sensations, and feelings in the emergence of intelligence. Organisms that were once regarded as little more than biological automata can now be understood as agents, actively shaping their world as they are shaped by their relationships to it.

Aesthetic valuations and subjective feelings play indispensible roles in ecological systems. And, because the living world is made out of deeply interwoven relationships, feeling relations can be said to constitute ecological relations. With these understandings now beginning to enter mainstream knowledge (in the growing recognition of the importance of embodied cognition, for example), the time seems right to explore practices that foreground our aesthetic and emotional experience of nature, towards the goal of developing a culture of right relationship with nature rather than exploitation.

After conducting a promising field test at Milwaukee’s Urban Ecology Center with some performing artists and teachers of a variety of somatic disciplines in 2017, I wanted to develop a practice format that would be broadly accessible and able to accomodate many different arts and traditions. I found an appealing and well-tested model in shinrin-yoku, or “forest bathing,” a practice that was developed in Japan in the 1970s and has since been adopted in many countries. I connected with Bill Hebbert, a certified forest guide who happens to live in my hometown of Milwaukee, Wisconsin, and went on one of his guided walks. It is a simple yet surprisingly potent practice of contemplative walking in a natural setting, punctuated with “invitations” to playfully explore varied interactions with the living world. The sounds, smells, and sights of the forest environment let us slip easily “out of our heads,” and into a full-bodied sensory immersion, allowing us to notice many things which we might typically ignore. This format provides an open space within which many different possibilities can play.

Having arranged for three teachers from different traditions to facilitate programs in their discipline, I took them on one of Bill’s walks. This gave everybody an introduction to the potential of contemplative immersion in the woods, and also common ground for communication. I then sent the facilitators these questions to consider while planning their programs:

How does your discipline... 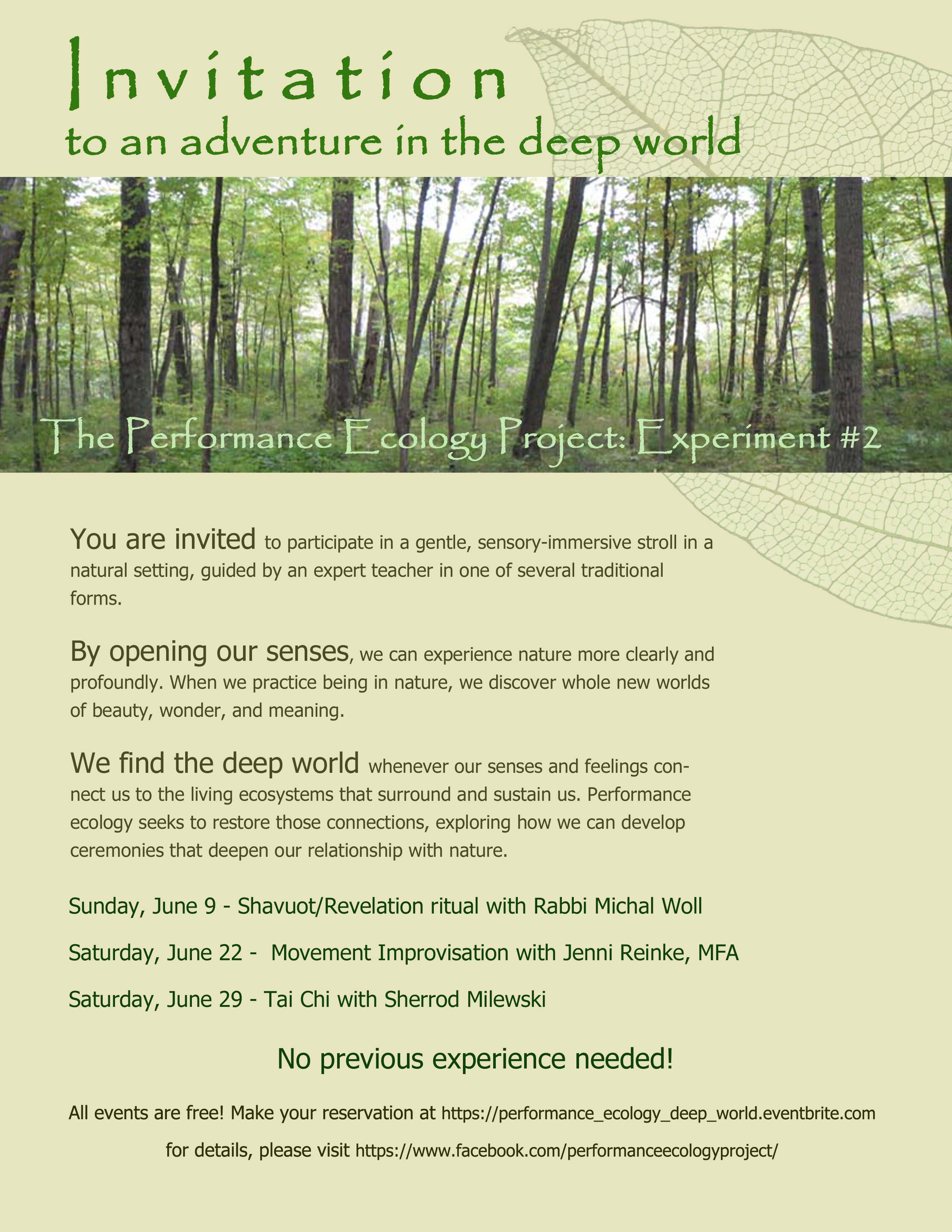 I met individually with each teacher to walk the land on which their program would take place. We identified our routes and discussed the appropriate sites for different activities. Thanks to my three collaborators’ generosity, creativity, and expertise, the process was a lot of fun, somewhere between planning a class and creating an original performance.

Rabbi Michal Woll of Congregation ShirHadash is a progressive cleric skilled in ritual structure and creative in adapting ancient traditions to contemporary needs. Her program became an extended exercise in meaning-making. She noticed that the program date coincided with the major festival of Shavuot, which celebrates the revelation of the Torah to the Jewish people. In a wooded clearing, she led a series of postures based on the Kabbalistic Tree of Life, a kind of diagram of divine attributes. Each pose evoked an experience of that attribute (such as wisdom or compassion) in both the practitioners and in the environment. Leading us up a hill to another grove, where a majestic tree stood near an formidable rock, she told us that the tree is a sign for the Torah, while the rock is a sign of the divine: the ancient metaphors here made tangible. Combined with silent walking in the style of forest bathing, it was a very powerful experience, as evidenced by the remarks people offered in the occasional talking circles.

Another productive exercise was “free wandering.” We were invited to go off solo, find anything that piqued our interest, and spend time with it looking deeply, then gathering back together at a prearranged signal after ten minutes. This exercise generated rich, poetic comments in the talking circle.

Jenni Reinke, a dancer, choreographer, and teacher, used movement exercises to emphasize the perception of space in various modes. She led us in slow 360-degree turns while taking in the sights, sounds, and smells of the landscape. In a site with more or less evenly spaced trees of different sizes and shapes, she had us first move among them in “corridors” created by ever-shifting alignments of space. Then, we interacted with the trees physically, making contact with different parts of our bodies, leaning on them, and giving them our weight in as many ways as we could find. This enabled an immediate, very bodily experience of trees in ways that simply looking at them could never give. Later, we mirrored in movements the sights and sounds of a cattail marsh lively with red winged blackbirds. At the end of the walk, Reinke facilitated a group movement composition that recalled what we had experienced.

Sherrod Milewski, a senior instructor at the T’ai Chi Ch’uan Center of Milwaukee, created an elegant program of forms from several different schools of tai chi and chi kung. On a hilltop clad with wildflowers, we performed moves that emulated wing and bird flight; moving down to the riverside, we matched the flow of the water with our gestures. In a clearing lush with late spring growth, we learned a chi kung form that embodied the growth of vegetation, taking nourishment from water, soil and sun. Free wandering again led to expressions of spontaneous poetry. We concluded the program with movements that expressed gathering chi energy and offering it back to the land.

In general, this format of a silent walk punctuated with well-chosen exercises and the occasional talking circle, culminating in a group action, is a very workable way to weave embodied tradition into the experience of nature to create sensory, feeling-rich, and meaningful relations. This experiment was but a toe in the ocean. The possibilities for further study are immense. Practice does not require any particular belief system. I would like to see programs that respectfully incorporate Christian, Hindu, Muslim, and Native American practices, not to mention all the performing arts: music, song, poetry, and dance forms.

There are numerous therapeutic somatic practices to explore: Feldencrais, Linklater, Alexander, Bodymind Centering, to name but a few. All offer tremendous opportunities for experimentation and play. And we can go deeper: to truly establish ecological relations with biocommunities, we need to incorporate scientific knowledge about their specific (and often amazing) life cycles and interactions.

We also need to explore the full range of our own feelings toward nature if we want to create authentic ecological relations. Along with the peacefulness, joy, and gratitude we feel in natural environments, we can also feel biophobia, the fear of nature. We may experience disgust for dirt, bugs, and microbes. Seeing the damage caused by human action may bring sadness and anger. The natural processes of predation, death, and decay elicit profound emotions. We can be certain that traditional cultures have pragmatic ways of working with such conflicting emotions. Yet modern lifeways would not accommodate many traditional practices, even if there were not legitimate issues of cultural appropriation to consider. Urban dwellers must develop ecological practices that embody feelings, meanings, and relations as we experience them today—not those of hunter-gatherers or village agriculturalists—as well as enact relationships with the natural world that we aspire to.

I am not suggesting that performance ecology replace scientific, technological, and legislative actions on behalf of the environment. I do propose that we include the aesthetic and feeling dimensions by which we experience value and create meaning in our cultural productions. A feeling connection is an ecological connection. While articles and books can nudge us in this direction, practices fully engage the qualitative and emotive faculties in immediate, visceral ways that can be enfolded into culturally-transmittable memes.

There is no way to transform our world into an ecological culture overnight. But by performing embodied ecological practices, we can gradually enact ecological culture into being. Remember, yoga and mindfulness were once considered exotic; now they are prescribed as medicine. And just as a placebo can effect actual healing through the performance of a meaningful ritual in ways that science has yet to fully explain, so the performance of “technologies of the imagination” (in restoration ecologist William Jordan’s phrase) may play an essential role in healing the human/nature relationship. And as practices deepen the more they are performed, there is literally no telling exactly what we will come up with in sustained collaboration with our nonhuman communities.

I have adopted the dandelion, that intrepid disrupter of suburban monoculture, as the totem spirit of this project. I release these fragile idea-seeds into the digital wind, hoping that some of them might find fertile ground. I hope you will be inspired to take some friends or family into the forest in a sensory, embodied way, find a forest bathing program, and find your own style of relation.

As we humans are inveterate meaning-makers, you may have created your own ceremonies for relating with nature; if so, I would love to hear about them. I would also welcome inquiries should you wish to develop a performance ecology program of your own.

The Spell of the Sensuous by David Abram

The Logic of Practice by Pierre Bordieu

Your Guide to Forest Bathing by M. Amos Clifford

The Meaning of the Body by Mark Johnson

The Sunflower Forest by William Jordan

The Biology of Wonder by Andreas Weber