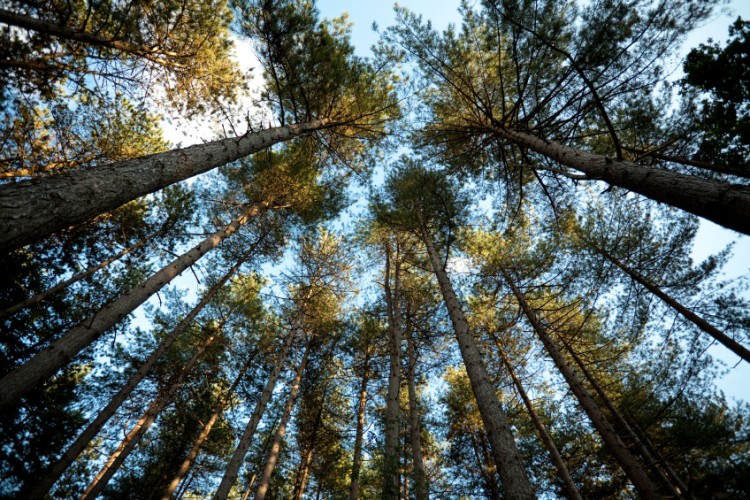 While I was walking alone in the Amherst College Wildlife Sanctuary last spring, I had a startling encounter. Without warning and from about twenty feet behind me, a dog barked. It was a single, short, sharp bark—the kind that my dogs make under their breath—a grunt as if to say, “Alert! Who’s that? Listen.” We humans make a similar sound when surprised.

But this sound seemed to come from nowhere. I turned around, heart pounding and… no dog. No coyote either, nor a wolf or any other creature. Weird. What did I hear? The sound was certainly real enough to startle me. I looked toward the spot from where I thought the sound originated, judging from its timbre, loudness, and directional characteristics. No one there. I was still alone with the trees and plants. Perplexed and a little spooked, I scanned my surroundings for the phantom. With my ears and eyes trained and focused, and my heart still pounding, I tried to make sense of the scene, lest fear get the better of my imagination. I was standing in a small clearing among tall pine trees. The day was cloudy and gray. The tree canopy was swaying with the wind. That was the only sound: the stately ebb and flow of waves of wind passing through the conifers.

Differentiating between static features (ground, trees) and moving things (leaves and branches swaying in the wind above), I observed no shadows of birds or small mammals either. Just me, the wind, and the trees. Then, a minute later, I heard it again. As I turned to face the source of the sound, I could tell it was not at ground-level, where I would expect a ghost dog to be, but emanating from above. I looked up. I noticed that the tall straight trunks of pines were not all growing perpendicular to the ground. Some of the trees were partly uprooted and leaning against each other. Soon enough, when the wind velocity and direction was just right, I heard it again.

Then I understood. The mysterious sound was a frictional noise at the point of contact between two of the trees, producing a resonant sound with a pitch and timbre that matched that of an animal voice, human or otherwise. I was reminded of similar sounds I make myself with a cello bow, rubber balls, and pieces of wood, all amplified with a piezo disc contact microphone inside my self-built instrument, the springboard. With this ghostly intrusion demystified, I remember being struck by how marvelous it was that the tree’s bark could actually “bark.” I usually avoid anthropomorphizing non-human phenomena, but now I can affirm that the woods really do produce uncanny sounds that lie within the vocal range of animals and humans, creating a “voice of the forest.”

I share this simple story to highlight the importance of listening and how an awareness of sound can transform one’s relationship to place. I also think my sonic misidentification and correction serves as an example—one among many—of how aural experiences can be difficult to translate into words. These experiences often remain unarticulated and therefore underappreciated.

If we are to find a way out of the current impasse, learning how to listen and developing an ethic of listening may be one way to resolve it. Learning how to listen is particularly relevant to understanding the lives of other animals. Most wild birds and mammals instinctually avoid human presence, so depending on your eyes alone may be a less effective method of contact than relying on your ears. When the robins nest on my porch in May and the Canada geese fly over in October, I am reminded that each species has a special way of voicing needs and desires, according to their circumstances. I am a part of their acoustic worlds, making and listening to the sounds of this place.

Some say that acoustic ecology places a negative emphasis on noise in urban environments. In fact, it is concerned with improving the quality of the sonic environment, or soundscape, by re-sensitizing aural faculties both on the individual and the social level. This approach was pioneered in the late 1960s by the Canadian composer, educator, and founder of the World Soundscape Project, R. Murray Schafer. He realized that it was better to set aside moralizing about noise pollution in order to objectively study all aspects of the soundscape.

Schafer founded the World Soundscape Project in 1971 at Simon Fraser University (near Vancouver, British Columbia), where he and a team of six paid researchers began a pioneering study of sound and the environment. Schafer went on to coin many terms and phrases that he believed would make acoustic phenomena tangible and help others to comprehend their existence—including the term “acoustic ecology” to describe a new field that united social, artistic, and scientific concerns in the acoustic environment. This was among the WSP’s first contributions to establishing a new kind of ecological awareness.

Prior to the WSP, sound had been studied either as a musician’s concern or as an engineering problem. Schafer’s The Tuning of the World: The Soundscape, published in 1977, changed this limited understanding of sound and became the seminal text on acoustic ecology. (The Handbook for Acoustic Ecology, edited by Barry Truax and mentioned in a post on this blog by Andrew Yang, also remains useful.) Tuning of the World was the culmination of the WSP’s research and it inspired a global movement and interest in soundscapes. Of particular importance is Schafer’s proposal that the complexity of a soundscape is not just a consequence of various phenomena in action, which we can passively enjoy or endure. Rather, he argued that we are also creators of this soundscape, often unaware but nevertheless actively altering it, be it in the most remote wilderness or in the most densely populated urban centers of the world. Thus, Schafer proposed a new field of acoustic design, an interdisciplinary effort of science and aesthetics. Its efforts would include what Schafer provocatively described as “practical repair work” as well as “utopian excursions.”

Schafer’s interests in such “utopian excursions” have prompted me to ask myself and my students: What might a “listening ethic” be? And, how might such an ethic apply particularly to understanding the relationship between humans and all other forms of life?

In an attempt to gain some clarity about these questions, I have begun to keep a list of listening qualities that would support a “listening ethic.” This list can be discussed, debated, and dismissed. I know it probably lacks many words—making it an assignment, a task, and a game for you to play and build upon, contributing to a transformation in ideas that can be applied in private or public. My list is mostly adjectives that are descriptive of attitude. These adjectives are meant to playful, inviting you to contribute to their meanings. They can also be placed before the word Listening in order to suggest different ways of listening and acting in the world:

Open – a simple, non-judgmental attitude, similar to peripheral listening, or listening before constructing a meaning from what is alien or opaque

Attentive – similar to “open listening” but with a focus on a particular feature or set of features that sounds bear; use your memory to record them instead of an electronic device

Balanced – if you make aesthetic value judgements about the sounds you like or dislike, are you being fair, and what criteria are you applying?

Focused – whether something on the periphery is teasing you into the liminal space between real and imagined, or the abundantly obvious oppresses you, use your imagination to follow the sound to its hiding place

Inclusive – what matters and what doesn’t?

Critical – listening inclusively, begin to parse your desire for meaning

Sensual – sounds touch you and move you—they caress, they rock; do sounds buzz, hum, and tickle you, luring you closer?

Transformative – how and when do sounds bring about an epiphany, a long-forgotten memory, or a strong emotional shift?

Restorative – a walk in the woods does it for me

Collective – the experience of listening with others; for example, a Quaker meeting occurs mostly in silence to achieve deeper spiritual meaning; this type of listening could connect “inside” and “outside”

Imaginative – make and listen to a sound in your mind that has never existed before; have you dreamt a sound that you never heard before?

Forgiving – there are words to express this, but what sound expresses this?

Analytical – a type of critical listening, which may be the opposite of forgiving and open listening

Responsible – obligations you may have when others do not listen

Peripheral – unfocused listening that explores the edges in order to be sensitive to all events all at once, it may be a little like aural multi-tasking in an open-ear state of “listening in readiness”

So, that’s my list so far. As I look over the words, I wonder: Can it work the other direction? Can recognition of listening as a learned, cultural practice engender or deepen ethical thinking and character more generally?

In 2009, I asked Bernie Krause to write a vision statement for the World Listening Project. He immediately wrote back with this statement:

A few remaining societies in our vast world know how to listen. It is an inherent part of their existence. One in which the received soundscapes of the forests, high plains, deserts, mountains, and coastal regions combine seamlessly with the visual, olfactory, and tactile senses. In some tropical regions dependence on acoustic perception supersedes that of all the others. Natural soundscapes serve as inspiration for their song and dance. It heals them physically and spiritually. Western society bases most of what it hears, or what it knows on the visual. We actually hear what we see. The World Listening Project aims to transform that perception in our otherwise urban-centric and abstracted lives. At a time when we are facing not only a silent spring, but a silent summer, fall, and winter as well, it is clear that where a picture is worth a thousand words, a soundscape may soon be worth a thousand pictures.

Bernie’s notion that “a soundscape may soon be worth a thousand pictures” is worthy of deep consideration. The turn of phrase is informed by a key tenet of Schafer’s, a rejoinder to privileging visual over aural sensation and knowledge. When survival depends on sensing and predicting the comings and goings of creatures in the absence of vision, listening takes on profound importance. And so, it may seem ironic that while you read this, my words about listening come to you as text, in a visual medium. I have given you nothing to listen to.

Or have I? Try to just listen, if you can. Now. Sounds are all around, and the sounds go ‘round and ‘round. What do you hear? The near, the distant, the barely audible… the “bark” of two trees? This practice is one to take to the city streets, the alleys, and the pocket parks, as well as the woods. There are new worlds awaiting active listeners.

Eric Leonardson is a Chicago-based audio artist, performer, composer, and acoustic ecologist. He teaches in the Department of Sound at The School of the Art Institute of Chicago.