During a hot summer’s day years ago, the shade that a street tree provided from the blistering sun stirred up some emotions in my grandpa. “Trees gives us so much and they ask for nothing in return,” he said with notes of sorrow in his voice. I wiped sweat from my hairline and nodded earnestly. I didn’t know why he sounded sad. I didn’t know yet that trees are often poorly repaid for all that they do for us.

For the first time in my life, I own my own tree (inasmuch as it can be owned). It lives in the back northeastern corner of my garden in Oxford. A common lime, it stands several feet taller than the houses around it. From about two feet off the ground, its trunk bifurcates. I wonder how old it is but don’t know how to work it out. 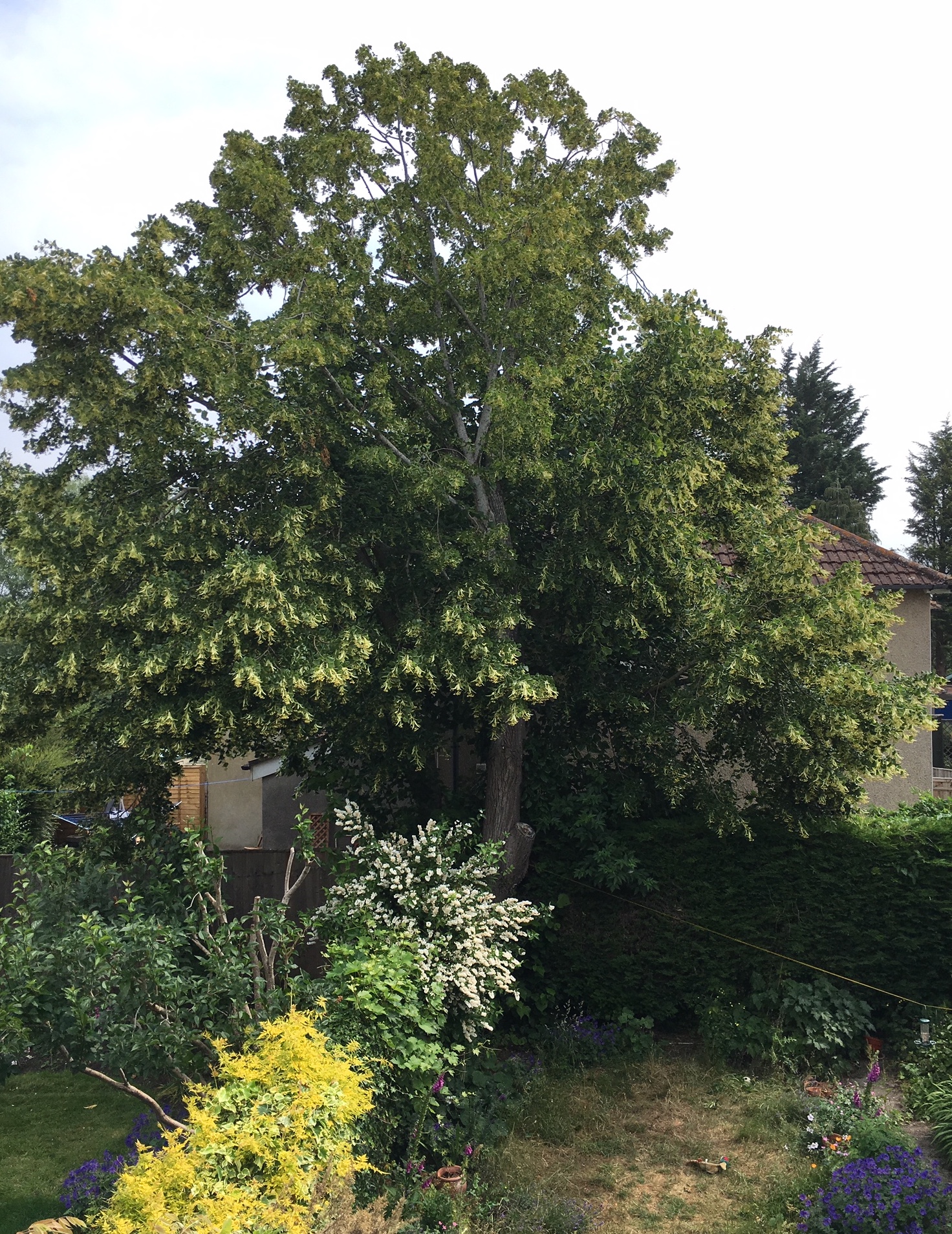 I’ve come close to having a tree of my own a couple of times before. When I was a kid, my dad planted two saplings in our front garden, one each for my sister and I. For some reason, mine didn’t grow, while my sister’s, which had dark red foliage, became enormous and beautiful. (This is not a metaphor for the way she and I grew as humans.)

A few years ago, I got a call one afternoon from my neighbour, H, where I used to live. The gale force winds that had ripped through the city—creating trash tornadoes in doorways and making my commute to work by bike rather too turbulent—had uprooted one of the trees in his garden and laid it across mine. When I got home, I saw that the way the tree had fallen, only the trunk was in my garden. The roots were still on H’s side of the chicken wire fence, while the crown was resting in the garden of the neighbour on the other side of me. For a couple of days, I had a tree, but only the middle bit of it, and in the wrong orientation. Then city workers with chainsaws and a wood chipper came and took it all away.

When my husband and I got the keys to this house back in March, and I realized that it wasn’t just the bricks and mortar that were ours but the tree as well, I was delighted and grateful; not every garden is graced with a mature tree. Most of all, I felt a sense of responsibility. I know people who have cut down the trees in their gardens for various reasons (subsidence, blocking sunlight, etc.). Now that I am in the position they once were, I have sworn, naively some might think, to make sure that my lime tree outlasts us all.

Here is what I now understand about my grandpa’s state of mind that sweltering summer’s day: some people see a tree and see only an obstacle.

Just in the months since the lime tree came into my legal possession, trees elsewhere have had a particularly bad time of it. Not that far from where I live, the high-speed rail project HS2 has cut down hundreds of trees in several woodlands (some apparently containing active bird nests, making their felling illegal) and let thousands of saplings, planted in 2018 as part of its environmental restoration efforts, die from thirst because watering them in a drought was a bit pricey for their liking. Meanwhile, illegal logging has ramped up globally while everyone’s distracted and potential witnesses to crimes are largely absent. In Indonesia, at least 130,000 hectares of forest have been cleared. In the Democratic Republic of Congo, 100,000 hectares. In Brazil, 95,000. How many individual trees does that amount to? It’s a sad irony that being numerous does not count in their favor.

Yet, lately, trees have also been gaining more allies than perhaps they’ve ever had. Since we all watched in horror as huge tracts of the Amazon went up in flames last year, the sad, tender sentiment expressed by my grandpa—that if you let a tree alone it’ll give you an awful lot in return—has gone mainstream. The pandemic has further cemented these feelings, having made it clear that cutting down forests makes us vulnerable to harms we can scarcely conceive, and that when the chips are down nature can buoy you up again. Close to home, HS2 contractors keep finding activists up the trees they are supposed to cut down. Tree-planting initiatives have become wildly popular. People are buying up small woodlands all over the country to rewild and keep intact.

While defending trees was once considered the preserve of Indigenous people living in forests and a fringe of “tree-huggers,” trees are now a global battleground. A symbol of the future many of us want, pitted against the insatiable appetite of capitalism.

In this context, being the guardian of a single tree—which nobody is trying to fell to make way for infrastructure or agriculture, to use for timber or to mine the ground below it—is both insignificant and momentous.

In early spring, as the days were lengthening, a robin came and sat in my lime tree every time the sun went down and sang and sang. As the leaves came in, it became harder to spot him, but his song cut through the lockdown quiet clearer than a bell.

By mid-May, he seemed to have moved on, probably to breed, but many other birds have visited the tree since I landed here. A starling in search of a mate, alternately whistling, trilling, and making a clicking sound in his throat. A pair of wood pigeons who cause a great ruckus with their wings as they do battle along the branches. Singing blackbirds and blue tits pausing for a rest. Now that the tree has put on its flowers, the bees are making the most of it too. There is a hook nailed into its trunk by the previous homeowner that holds up one end of my washing line, from which I have hung a bird feeder. The sparrows come to it in droves, even after a hawk swooped in and carried off one of their number. So now I think of the washing line as part of the tree. 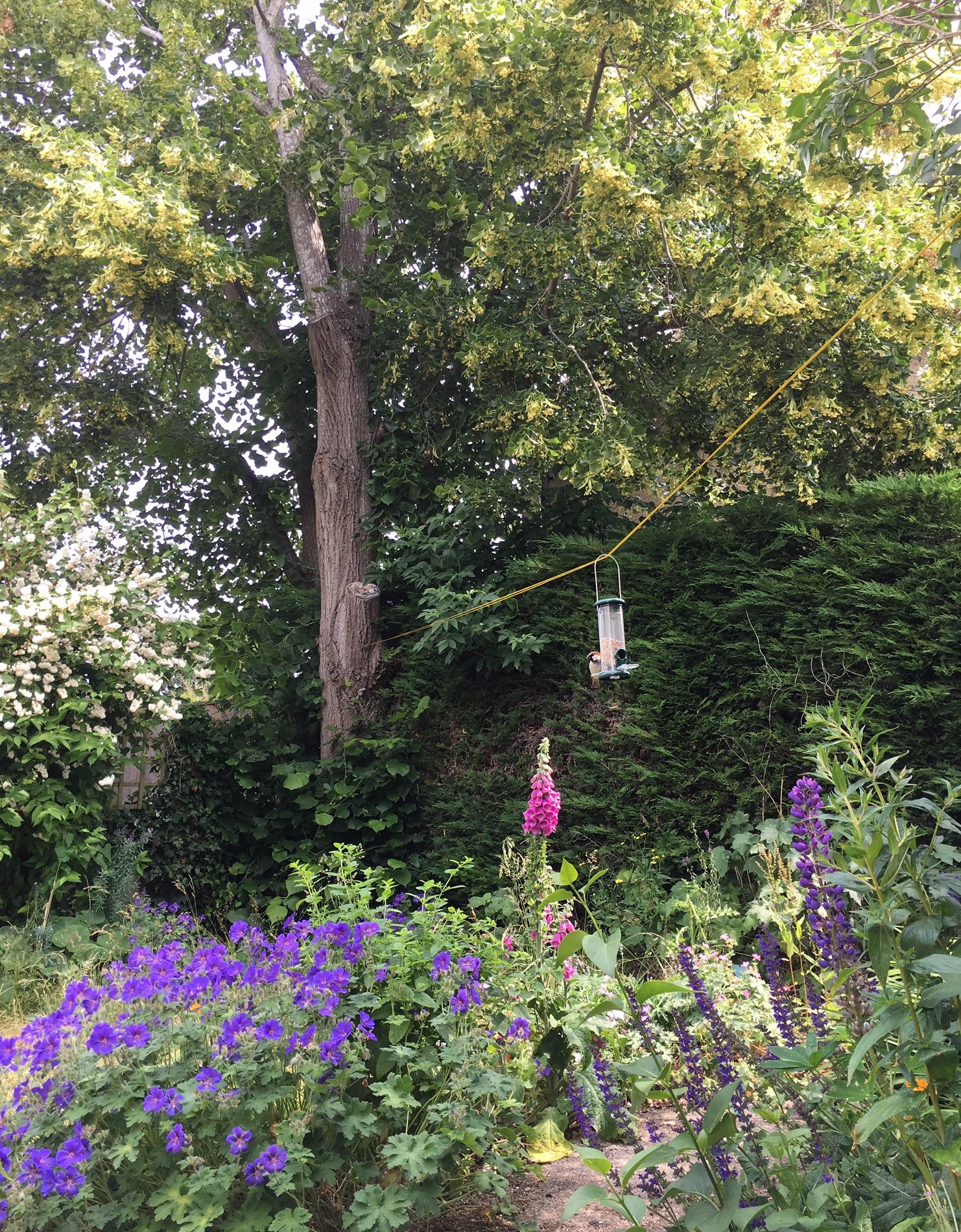 Here is another thing I now understand about what my grandpa said that day: in a sense, he was wrong. The tree isn’t really giving us anything; it’s just being a tree. True, it doesn’t ask anything of us, unlike the sparrows in my garden seem to when they come to the feeder and find I forgot to refill it today. Yet now that cutting down a tree, any tree, has finally been widely recognized as a controversial and morally charged act, it doesn’t really matter that the tree asks for nothing, because we have to give it something anyway: either our allegiance or our apathy. We must choose whether we will notice and not take for granted all the quiet bearing up of other lives it does as a matter of course. Whether we will take as our starting point that a place—a woodland, a street, a garden in Oxford—is better off with its trees than it would be without them.

Claire lives in Oxford, UK, and writes about the environmental and animal welfare and rights. She can be found on Twitter at @HamlettClaire or on her website: clairehamlett.weebly.com.