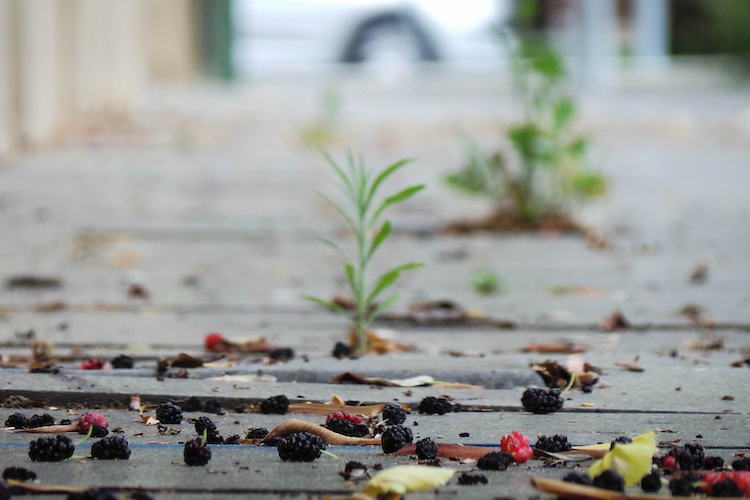 My back-alley view would be uninspiring but for a large and living intruder.

A sprawling canopied, out-of-place, forty-foot mulberry—Morus rubra—plays constantly with the incoming light. As I write this, I note its serrated, heart-shaped, autumn-tinged leaves fluttering gently in the mid-afternoon breeze coming off the lake. Brown speckled, white-throated sparrows hop from twig to twig—this being their usual hour of appearance. A chubby, rust gray fox squirrel scampers impossibly along lacy branches, then freezes and wall-eyes me through the open window, protected by a screen. Squirrels carry on that way, often within arm's reach, even when our hefty orange cat, Oliver, crouches on the windowsill to gaze upon the scene like feline reality TV.

It is a native North American red mulberry, probably sprouted wild along the property line from bird droppings or a squirrel's cache, well after the 1920s apartment buildings on our block went up. Maybe a child eating mulberries spit a sour one on the ground there when John F. Kennedy was President. 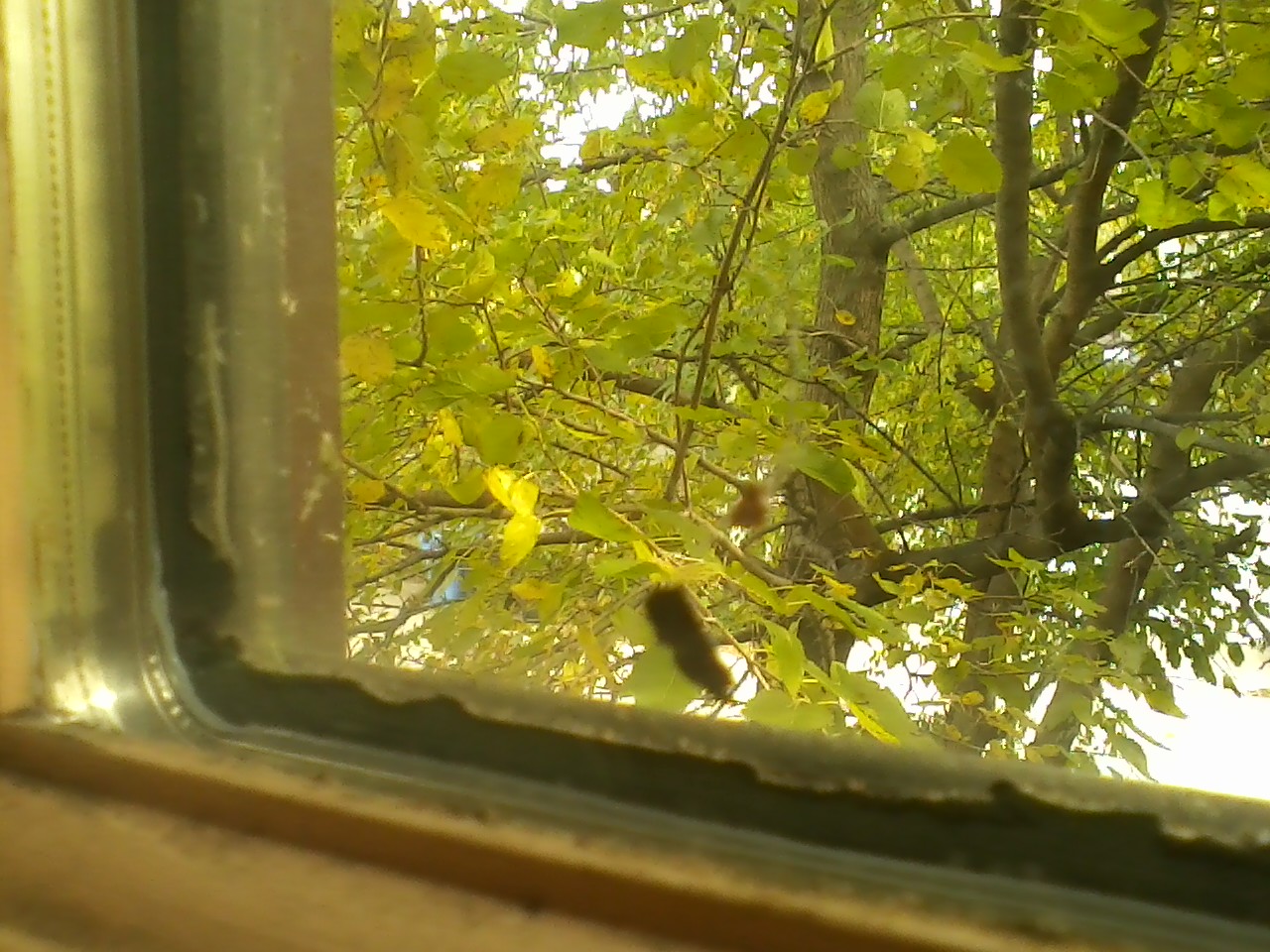 The double windows of the spare bedroom in the condo flat where I write look eastward onto a service alley cluttered with trash barrels, telephone poles, power lines, parking spots, garages, and the occasional utility truck. For this we can thank the foresight of long-ago urban planners, who insisted on tucking such quotidian passageways discreetly between the elm-and-maple-shaded streets of our chummy lakeshore neighborhood on Chicago's north side.

I've observed the changing seasons, day-by-day, through this quietly magnificent mulberry over the past four years since moving to Chicago from San Francisco. Soon its leaves will be yellow and gold, then lost, carpeting the driveway beneath, giving way to winter icing its dark spidery bare branches. Sometime in late March or early April, when the seeming endless days of bitter cold relent, rosy nubs will slowly, very slowly, burst into milky green buds, then pale green leaves and small yellowish blossoms. Examining these same buds led me to the conclusion, by the way, that my mulberry is female, rather than a pollinating male, probably lucky given my moderate proclivity to allergies. By late spring and early summer, the flowers will fruit into pink, then dark burgundy berries—bursting forth from every twig of the tree's network of witches' brooms thick with leaves. 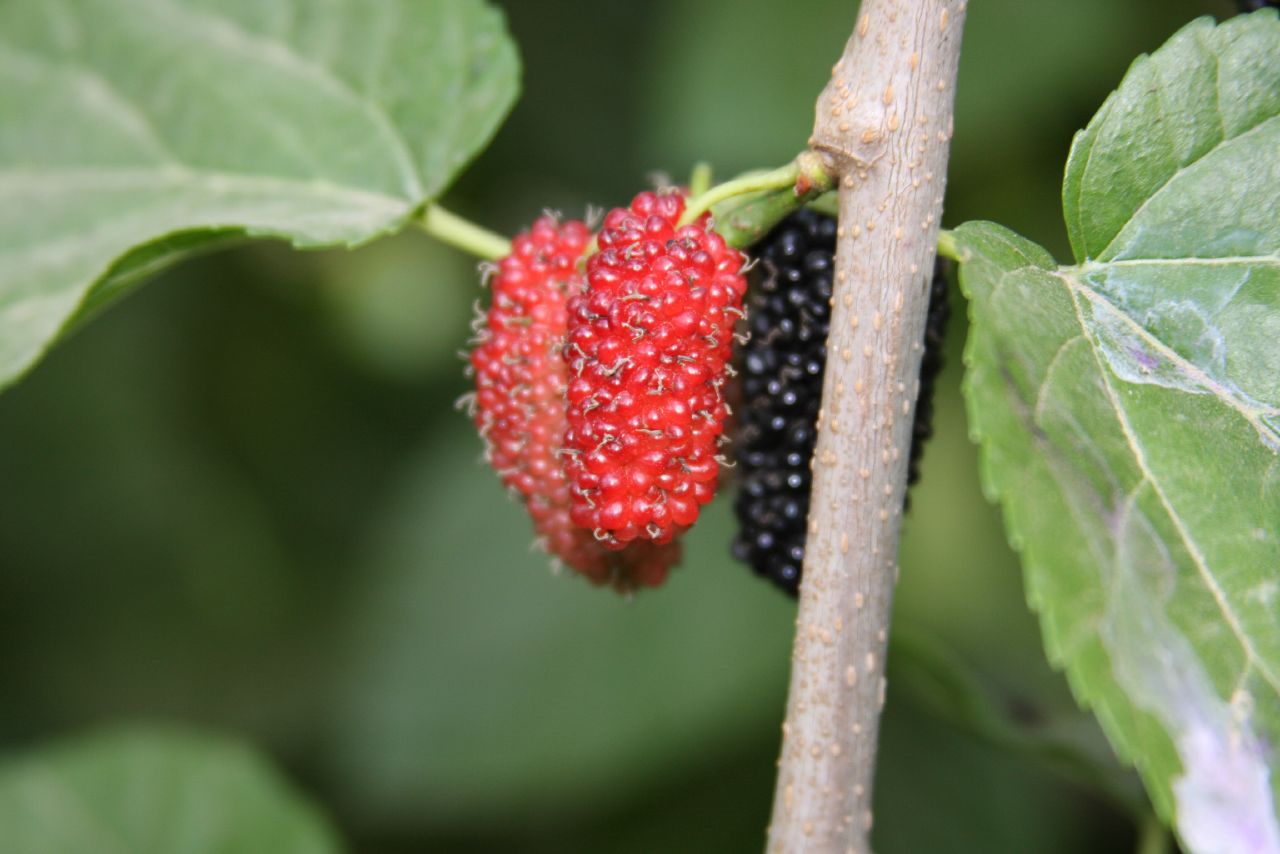 The squirrels will feast, holding a berry in their prehensile front paws, as they munch meditatively. Birds, who have been singing up and down the alley from their high perches in surrounding trees, poles, and wires, will visit the fruiting mulberry in shifts, taking turns in civilized fashion as they gorge themselves and fly off—sparrows, black-capped chickadees, white breasted nuthatches, house finches, goldfinches, and wrens. I will keep watch for the elusive cardinals, hoping to catch sight of the swift scarlet males who never stay long enough for me to grab my camera. Blue jays will invade on occasion, and mourning doves will waddle unobtrusively on the concrete-covered parking apron beneath the tree, pecking a daily carpet of fallen, ripened fruit—pieces nicked off by the other birds feeding above. 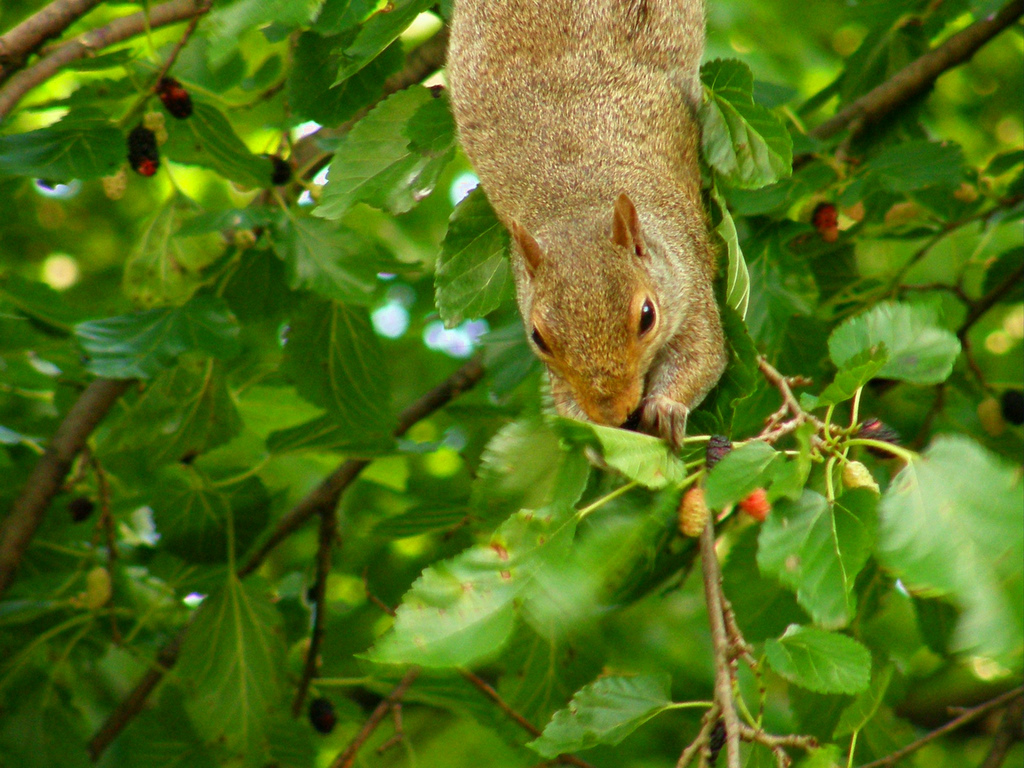 Kids playing next door or in the alley will stand on tiptoes or climb a branch to pick dark red mulberries. Taller ones will boost up tykes begging for a taste—one that they will never forget, that of sun ripened fruit right off a tree, ambushing one's palate with a kaleidescope of aromatic flavors, sweet and sour. The tree of fruit provides a rare feral experience for digitally intermediated, urban children that was special even in my day. 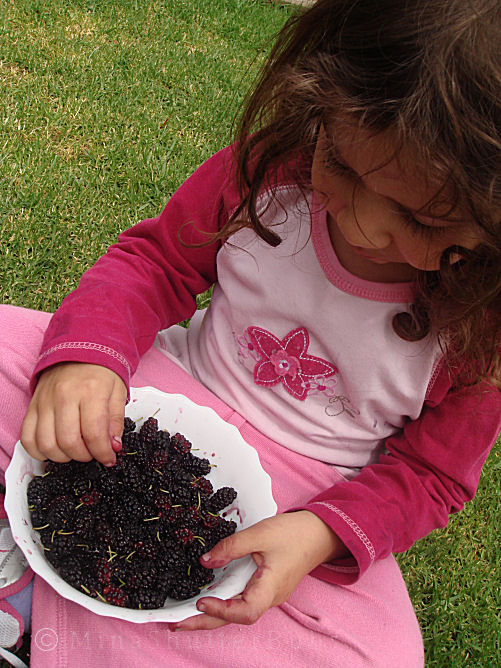 All seems well orchestrated by nature, even the feeding habits of the kids. I realize that my Morus rubra has a life beyond the utilitarian or even aesthetic attributes with which we tend to tag urban trees—more than decoration, more than summer shade, more than sweet fruit for the picking or putting into pies.

The tree—actually conjoined triplets, their sturdy trunks growing from a narrow crevice between a concrete parking apron adjoining our garage and the property line—is a living habitat for surrounding wildlife—a mother feeding her young, a hiding place and safe harbor where birds and squirrels feast and sometimes nest. Besides being a nursery, its bounty of berries fattens up the less fortunate of its inhabitants for native predators, never far away—red foxes, coyotes, raccoons. And circling silently, riding the thermals above, wait the ospreys, kestrels, kites, hawks, owls, and falcons. 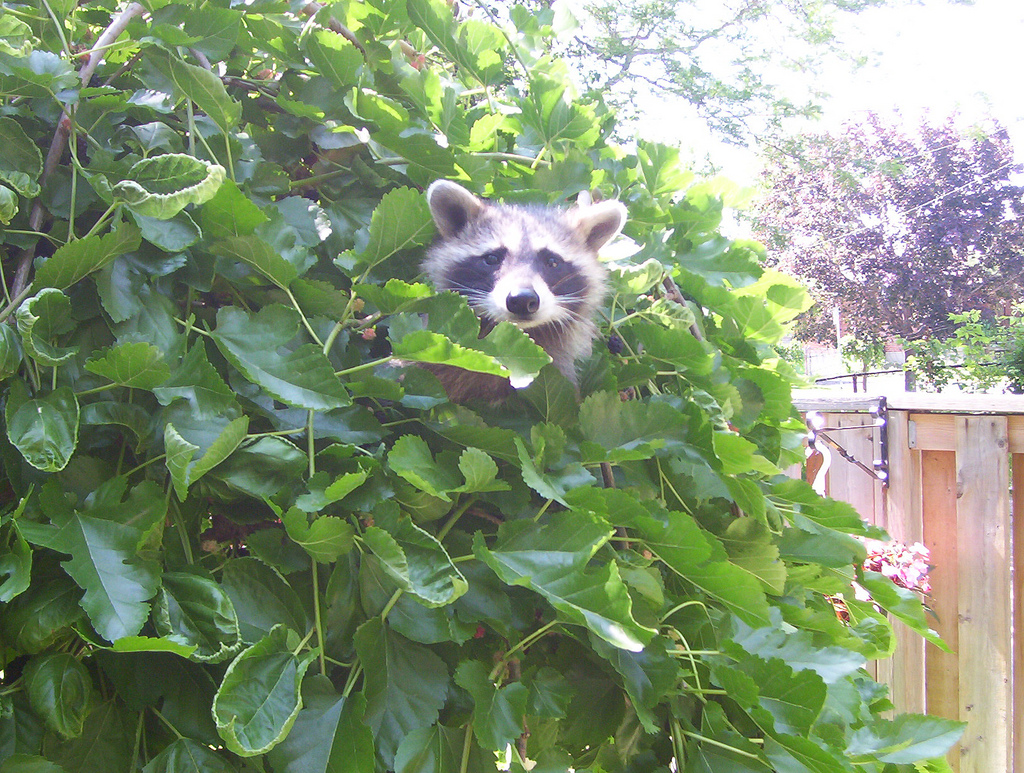 Mulberry trees grow slowly and live a very long time—in some cases hundreds of years, attaining heights of 60 to 80 feet, if untrimmed. It's hard to determine the age of my mulberry cluster, given that it has attained its present girth and height despite growing in the partial shade of our condominium's building.

Like all living things, my mulberry must survive the hazards of existence. During the weeks of a polar vortex two winters ago, accumulated ice snapped part of a branch and threatened to split it from the trunk. The tree probably needs a good pruning. Fungal diseases like sooty canker can damage bark, bacterial blight attacks leaves, armillaria root rot can cause the tree to weep and swoon fatally. None of these, however, matches the clear and present danger of humans.

Every summer, one of our neighbors, an otherwise pleasant professional widowed woman, who uses but does not own the parking space under the tree, has been campaigning to have the mulberry removed. She complains that the berries, along with bird droppings, glob her sedan during the six to eight weeks when the tree bears fruit. Then there are the leaves to deal with in fall. 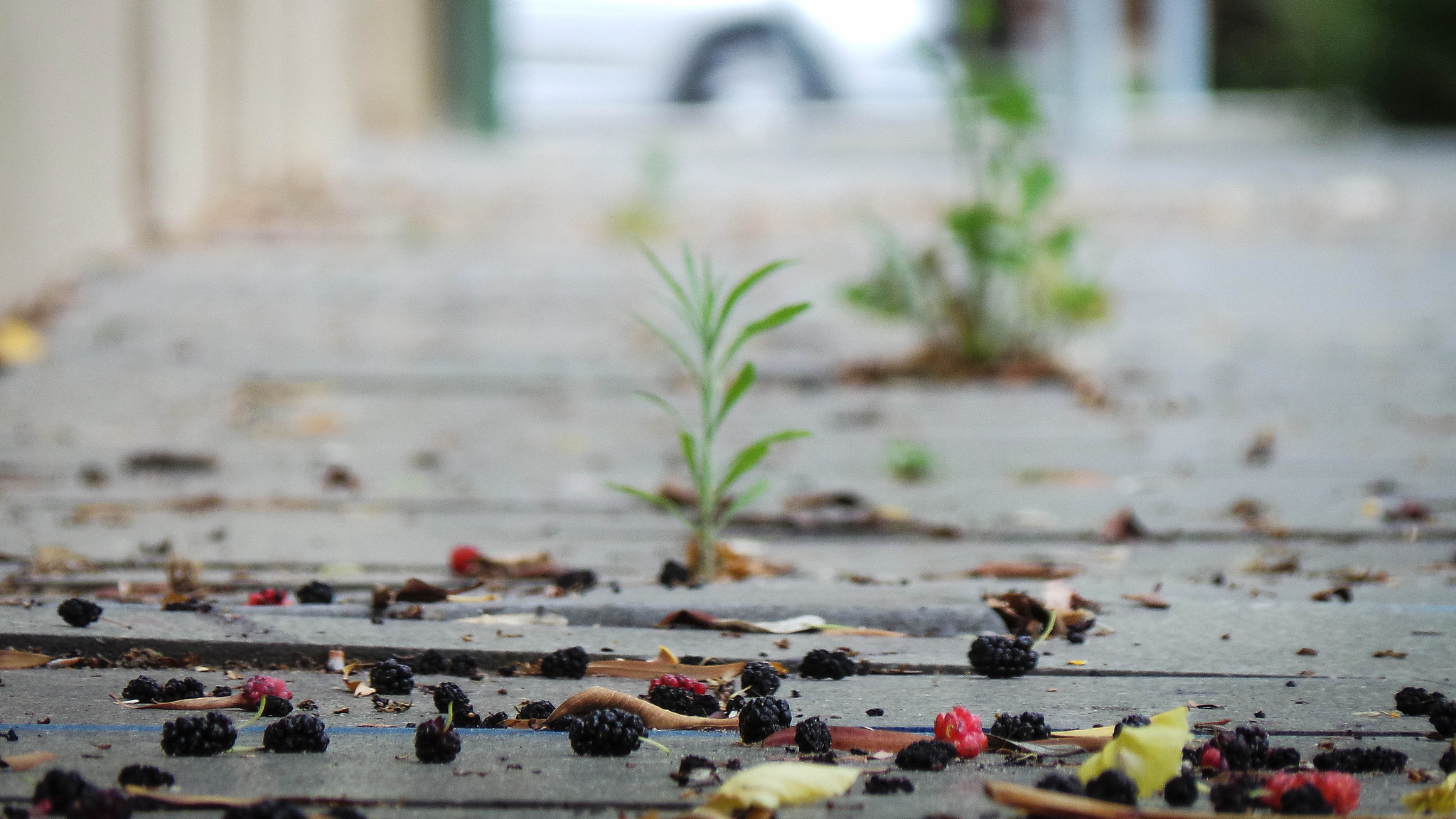 She and I clearly have a difference of opinion and, probably, philosophy of life. Nonetheless, I can empathize with her vexation as she starts her car and has to run the wipers to clear smeary berries from her windshield. And stepping on sticky fallen berries while taking out the garbage is no fun for either of us. But somebody has to stick up for this wild, unsanctioned tree and find a happier solution than chopping it down in its bountiful prime.

This has led to various ongoing communications, all of them polite but adamant. The situation has proved more complicated than it would seem at first glance. Score that as a plus for pro-mulberry forces. The mulberry's twin trunks appear to straddle the line between two lots. “You'd need a survey to tell for sure, plus an okay from whoever owns the property next door,” I said to our mulberry-vexed neighbor casually one June afternoon when she said she was looking into the matter. I plead guilty to a degree of guileful misdirection here. I'd been told that the apartment building next door is held by a real estate development company with more shells than a bag of walnuts.

Our messy mulberry wasn't getting off that easy, however. Our neighbor persisted—wrote letters and made calls. Time to negotiate some compromises. My inamorata, an avid bird lover, offered to trade parking spaces with our neighbor, allowing her to shelter her car in our covered garage space during the summer months when the berries fall.

“I don't mind. I'll park under the mulberries all June and July,” said my inamorata, who owns a white Prius. “I'd rather see my car dyed purple than let that beautiful tree be cut down,” she added.

In the meantime, for the rest of July, she and I took to sweeping and hosing down the parking space to clear off fallen berries. We also rallied the support of other neighbors, pointing out the shade that the tree provides our building during the hot summer months. All that led to a truce—at least for now. We'll see what happens next June when the mulberry tree bears fruit again and birds flock to its branches.

Strange how our arboreal mini-tempest came to mirror the greater environmental struggle in many respects—the conflict of aesthetics, outlook, and values that accompany ecological issues, along with the legal tangles, politicking, and negotiating. Most city and suburban dwellers like trees, but are only now beginning to see them as more than landscaping—as vital to the soul and sustainability of a life-giving natural environment that we share with many creatures. We've all been warned by bird populations diminishing alarmingly in the past decade.

Time grows short. Time to fight, one tree at a time, if necessary, and do whatever it takes. Even if that merely means hosing down the alleyway.