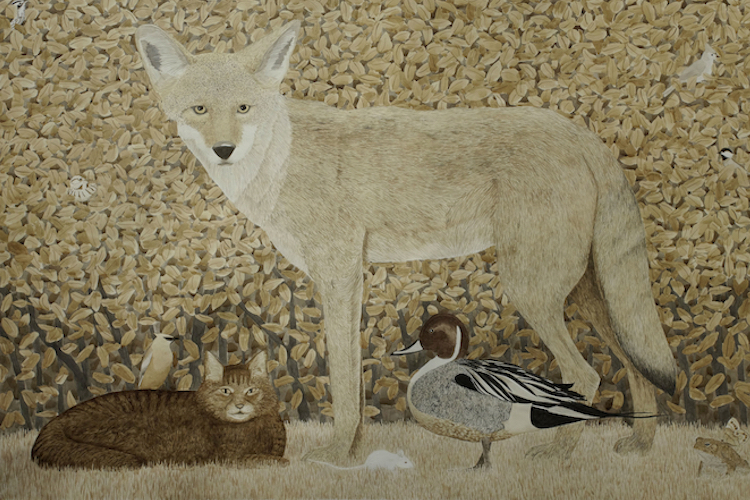 Upon completing an MFA in 2012, I returned to Montreal, a city where I had briefly lived right out of college. My first job back was with a boutique dog walking company that offers “wellness programs” for the well-to-do canine set. With never more than four dogs at once, I drove around the city’s architecturally adventurous neighborhoods picking up purebreds and taking them on good long walks. The dogs were great company, and the job gave me a lot of time to think about how we, humans and canines, had come to mingle in this modern city. I chewed on the absurdity of entwining my life with the lives of the Real Housedogs of the Town of Mount Royal. I thought about the trashcans as we passed them, ever full of bagged poop, and how the chemist that figures out how to turn this abundance into something useful will surely deserve a Nobel Prize.

As an avid bird-watcher I would keep my eyes and ears open during these walks. I glimpsed pileated woodpeckers, brown creepers, yellow warblers, golden-crowned kinglets, and a great number of other fairly common birds of this region. On my coldest day out, -29 Celsius along the canal with not a soul in sight, the only day Molly the thick-coated Newfoundland was truly happy, I saw a kestrel scorch across the sky and I was struck dumb by that bolt of animal life above the deeply frozen landscape. I began to think more broadly about the animals that we share this river island with. Who else spends winter outside? How many domesticated and exotic animals are hibernating, safe from the elements and perpetually under our care? In a city where the temperature did not rise above freezing for an entire month last winter, how strange is it that there is a steady supply of tropical fish? What would a comprehensive census of this city’s animal life look like?

On the dog walks I would also think about drawings I might make about this diverse mixture of animal life, and these thoughts became the basis of A Peaceable Kingdom, a series of large ink drawings that was exhibited at Pierre-François Ouellete Art Contemporain last summer. The title is taken from the works of the early American painter Edward Hicks in which he literally portrays the famous bible verse Isaiah 11:6 (“the wolf lies down with a lamb…”).

Rather than religious ideals to be realized in some distant future, the peaceable kingdom I am exploring is one we now find ourselves in the midst of, a natural world guided in large part by our activity and characterized by diminishing wildness. I am both mesmerized and horrified by the lion eating grass alongside the cow in Hicks’ paintings, and I have a similar range of feelings about the prevalence of exotic fauna found in this (and every) city. A great variety of appealing pets are ubiquitous in cities, and the enormity of the globalized pet industry seems to mask the extraordinary means (translocation, breeding, and so on) required to support it.

Stephen Meyer’s slim but powerful book The End of the Wild (MIT Press, 2006) was instrumental in framing my thinking about the state of wildlife today. This book unflinchingly examines the biosphere under the pressures of humanity. Meyer puts animals into three categories: weedy species that can thrive alongside humans, relic species whose existence is increasingly marginalized by human activity, and ghost species that are extinct in their native habitats and whose survival is dependent on humans. Without any difficulty, I found examples of each category living on the island: the peregrine falcon in Mount Royal is weedy, the wood turtle in Anjou is a relic, and the axolotl in Dollard-des-Ormeaux is a ghost. The latter is thought to be extinct in its native Mexican habitat but can be found in cities all over the world; in Montreal, I found them on Craigslist.

I portrayed animals life-sized, and the drawings are titled after different geographical names for areas of the island. Subjects were found in pet stores, houses and apartments, parks, the Biodome, Insectarium, and Ecomuseum (the three zoo-like institutions on the island), the Saint Lawrence River and other bodies of water, fields and open spaces, small forests, laboratories, slaughterhouses, model farms, the SPCA, and exotic pet expositions. 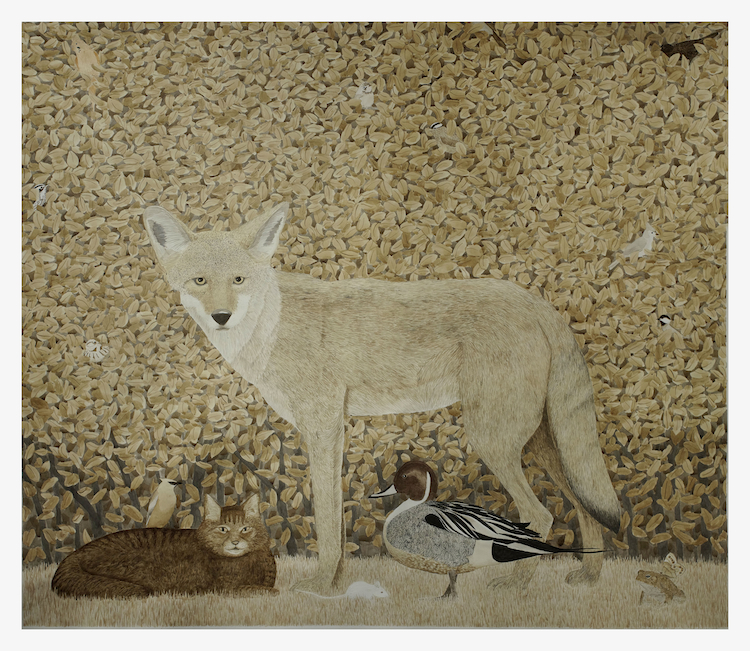 Notre-Dame-de-Grace juxtaposes relationships of the food chain: a coyote, a housecat (my own), a cedar waxwing, a laboratory mouse, a northern pintail duck, an American toad, and a northern pearly-eye moth. This grouping sits in front of a hedge that is peppered with songbirds and a budgie. As in all the drawings, the animals all gaze outwards at the viewer in acknowledgement of the shared space. 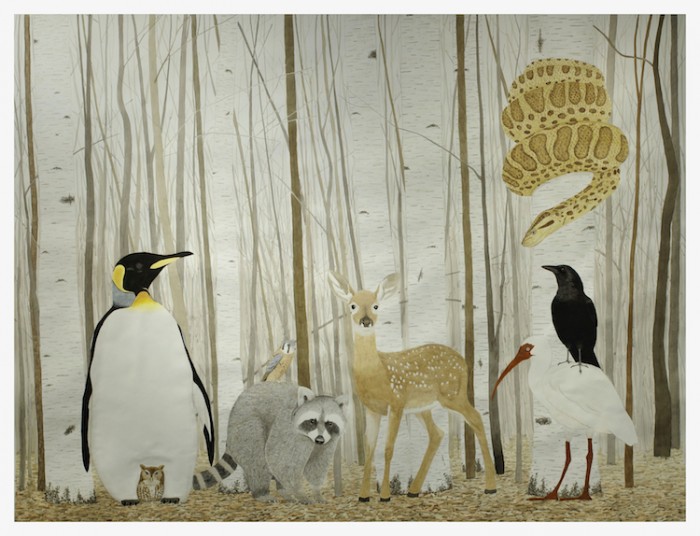 The Biodome is a converted Olympic stadium that houses five distinct North American habitats, including an Amazon rainforest and an Antarctic shoreline. The king penguin, white ibis, and yellow anaconda that are found in Pierrefonds live together under the roof of the Biodome. In the drawing they are accompanied by Montreal natives: white-tailed deer fawn, the previously mentioned kestrel, a common crow, a raccoon and a screech owl. 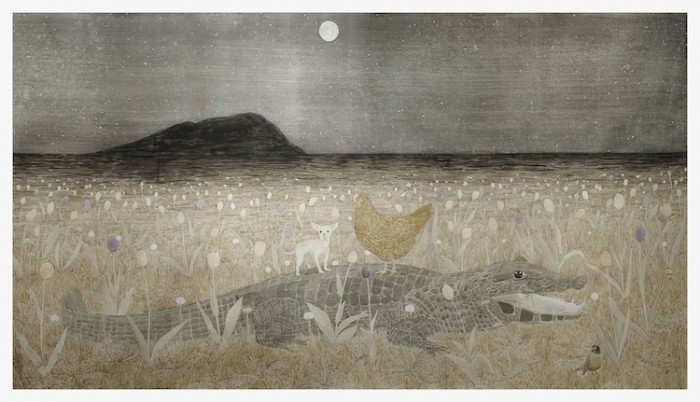 A Chihuahua represents the species that got the whole project started. In Ville-Marie, a teacup version sits atop a Yacare caiman (another resident of the Biodome) along with a chicken, and a robin stands near the gator’s open mouth. These animals sit in a strange field of tulips and dandelions under a full moon and star-studded sky with Mount Royal looming on the horizon.

Other animals represented in this loose survey include goats, loons, Canada geese, uromastyxs, beavers, mosquitos, piranhas, neon tetras, golden lion and cotton-top tamarins, turkey vultures, cockatoos, egrets, iguanas, wolf spiders, and skunks, among others. As just a sampling of Montreal’s animal life, this eclectic mix reflects a pot vigorously stirred by globalization. Our cities are ecosystems, and increasingly bizarre ones that reflect the chaos of today’s biosphere. A Peaceable Kingdom represents my efforts to make these contemporary juxtapositions and encounters more visible, and to ask what kind of kingdom our desires are creating.

My art is born in the complicated corners of nature's meanings, in the places where we attempt to insinuate ourselves within the natural or insist on our separateness from it; where we take what is natural and in so transform it into artifice; where we fear the natural and unnatural alike, and where we temper those fears with stories. Visit me and my work at http://www.ripleywhiteside.com