Before reading the large, diverse collection of essays, poems, and stories in Fracture, like many, I was concerned about fracking’s violation of the land and communities, but I did not fully grasp the wrong that it does. Fracture makes the reasons why fracking, or frac-sands mining, is wrong crystal clear, but it also gives voice to the complicated perspectives and socioeconomic factors that have helped to continue the practice. 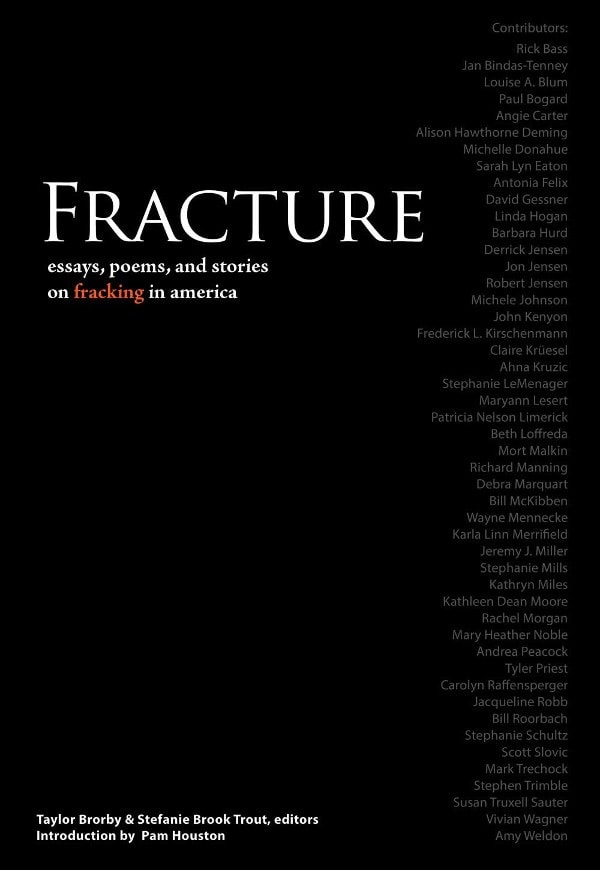 This anthology hosts the writings of nearly fifty accomplished authors, exploring the complexities of fracking through first-hand experiences, investigative journalism, storytelling, and verse. Each of the collected works has an extremely personal tone to it; this, paired with the talent of the writers, creates a treasury of outlooks that are more accessible and easier to relate to than purely scientific writing and articles. As a reader who had little experience with the complexity of the issues surrounding fracking, Fracture offered a selection of very engaging works that are accessible to a wider audience, including my novice self. Thanks to this collection, I have now become well versed in the beliefs of both camps on the issue, and in the socioeconomics that complicate the matter further.

There are repeated metaphors—and realities—throughout Fracture, driving home the importance of these factors and issues within the fracking industry. One of the persistent comparisons is the expression of fracking as a form of violation, and violence, against the Earth, and tying this to violence against womanhood and the female body. This begins in the Foreword, by Barbara Hud, titled “Fracking: A Fable”: “the shale shattered, the black rock spider-webbed with skinny fissures as the above world inserted its tendrils, and into those tiny rifts we rammed more sand to keep them wedged open wider” (iii). It continues in Amy Weldon’s essay, “A Miniature Handbook for New Women Activists”:“over and over, a woman who’s done nothing wrong suffers anyway. Her body is the holding pool for the runoff of centuries’ worth of neuroses, rages, and toxins, figurative and literal” (43).

Fracture alternates between these deeply personal essays and poems and works that consist primarily of science or investigative journalism. This juxtaposition jolted me emotionally. Supporting personal, traumatic accounts with scientific facts and with powerful firsthand stories allows the different types of writing to work in partnership with one another, and this enhanced the writing’s staying power in my mind. There are shocking details about the industry that some may not even consider, such as the Halliburton loopholes, the nasty substance referred to as “brine,” and other aspects of the complicated nature of the fracking industry on all levels. The use of storytelling throughout the anthology, whether in non-fiction, fiction, or poetry, has been executed in such a way that the writing can convey complicated or dense scientific and economic issues in an engaging and even riveting manner.

The issue of fracking is one with many sides, and this collection doesn’t make easy assumptions; it does not oversimplify or assert only one point of view. Frequently authors manage to take the middle ground or to offer insight into the complicated fracking industry and how people and the Earth have become entangled within it. In this way, the success of the anthology doesn’t just come across in the clear talent of its authors, but also in the wide range of frames of reference and issues that they offer; in the different ways in which similar issues are discussed; and in the difficulty that is realized when an issue is so complicated. Take, for example, the realization that Maryann Lesert has in her essay, “The Ultimate Out of Balance”:“As he and I stood and talked, the feeling that good people with good intentions were blasting the earth below us with horrible chemicals and sand mined at great cost brought on that awful sense that there was no stopping the process” (358).

Although Fracture frequently offers a level-headed interpretation, it also tackles the heartbreaking extent at which fracking ruins and extinguishes the life it surrounds, such as in Antonia Felix’s piece, “The Extravagance of Vice,” in which the livelihood of a family, their history on the land, and the promise and hope that can be found in the future is stolen.

Some of the essays resemble those of other great environmental authors, such as Stephanie Mills essay, “Last Call: Frack Wells, Wood Frogs, and Leopold’s Ethic.” Mills description of the changing land around her Michigan home is reminiscent of Joy Williams essay, “One Acre,”in her book, Ill Nature.

In Fracture there are also some frequently recurring images used consistently throughout the collection—for instance, white trucks, light pollution, and sexism. The last is discussed by Beth Loffreda in her essay, “Towards”: “How often, when energy money turns up, do women re-learn in a variety of drably quotidian ways, their worth?” (179). The most prevalent issue is the destruction of natural beauty, the livelihoods of communities, and our shared histories. Andrea Peacock writes of world heritage sites being obscured by gas pads in “Three Rivers Quartet,” raising the question: What will we exchange for economic stability? And how much have we already given away? This question is addressed, and sometimes answered, throughout the book.

In some cases, Fracture offers space for reflection on what has already been done and cannot be reversed, such as in Richard Manning’s, “Now We’re Talking Price,” in which he explores the ways that nature—specifically the badlands—can soothe grief and help it to subside, and the resulting deep wound that the destruction of these places causes.

The collection closes with a poem by Alison Hawthorne Denning, “Homeland Security.” It offers a refreshing point of view, the slice of lemon on the rim of a clean glass of water—a glass this book has made clear is a great treasure that we should not take for granted, and that we should protect: “What is earth to an astronaut? / It is the exception to emptiness” (441). Denning thus offers that we quite literally need to see the bigger picture in a wholesome and concise way.

Overall this is a wonderful, eye-opening, and heartbreaking book that must be read, for the sake of our future and our present world. Although its size could be intimidating, it is an engaging and entertaining read about a subject that is usually daunting. And there is some joy to be found between its covers—joy in the beauty of the Earth that we share, and in the understanding we find in one another.

Fracking is an issue so all-encompassing that it has brought together voices from nearly all genres of writing, just as it has brought together communities and countries. I can think of no better way to describe the foundation of this unity than in the words of Louise A. Blum in her essay in this anthology, “Faith on the Front Lines”:

What sustained me here on this blockade is not religion but collective action—a faith not in the idea of heaven but in the immediacy of earth in the connection between land and water, in the knowledge that we live in a closed system and that what we have is all we’ll ever get and that what we lose is lost forever. (102)

Amanda Keener is a current graduate student in the Environmental Arts and Humanities program at Oregon State University with a focus in environmental writing. She earned a Bachelor of Arts in English from Portland State University, where she wrote feature articles for the Vanguard newspaper, and participated in wildlife conservation grant writing.