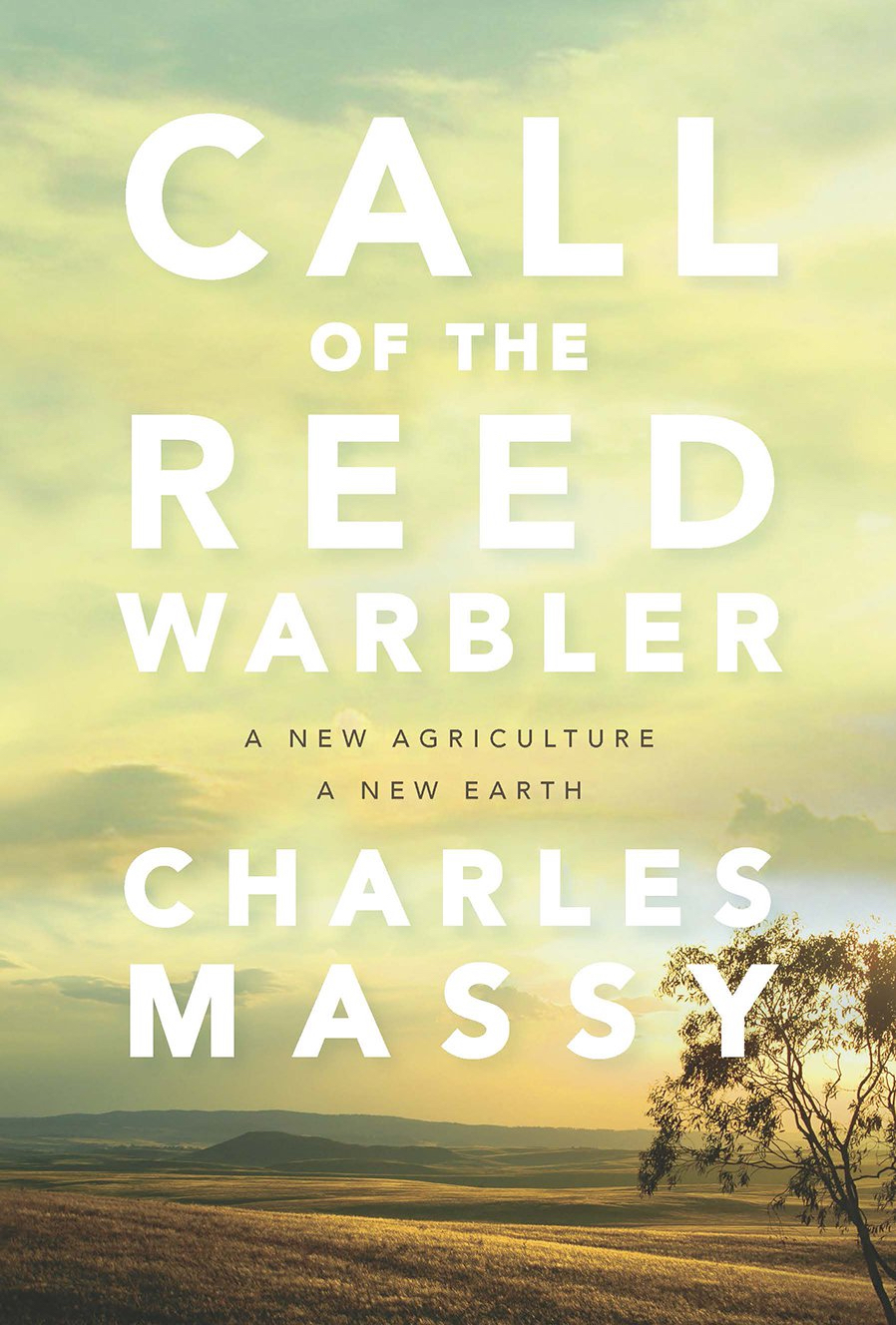 Call of the Reed Warbler, Charles Massy’s new poetic tome on regenerative agriculture in Australia and beyond, is several books in one. It features profiles of innovative practitioners told in a memoir format that also draws heavily on Massy’s doctoral work in human ecology. It’s an ode to abundant and self-willed ecosystems, and at the same time, a celebration of the role humans must play in restoring environments.

Unique to Call of the Reed Warbler is Massy’s perspective as a practitioner—a Merino sheep rancher and breeder for four decades. After taking over his family farm in his early twenties, Massy was immersed in the latest thinking on chemical pest control, pasture improvement, and conventional sheep breeding. His book thus reads as his journey back to nature—to the natural patterns and principles that underlie an agriculture with a very different trajectory from what he’d inherited.

No doubt in part because of his own perspective as a practitioner, Massy spares us some of the wide-eyed idealism that sometimes characterizes some discussions on regenerative agriculture. Discussions framed in this way can laud its benefits while simplifying the challenges inherent to trying to make land better in an economy that values only a narrow set of what farmers and ranchers can actually produce. Rather, Massy focuses on those who’ve managed to bring about measurable change on their land while staying in the green on triple bottom-line accounting. But perhaps more importantly, he delves into the principles behind the work of those he profiles.

Still, his book castigates mainstream agriculture today, criticizing practitioners whose practices don’t ring as regenerative. While he gives significant context to their profiles, he does little to acknowledge the real-world constraints limiting the available options to farmers and ranchers who may not have embraced the principles or practices of regenerative agriculture. Massy attributes their approach to a Mechanistic mind, rather than to a complex matrix of circumstances perhaps not experienced by those whose farms he celebrates. So while the book does plenty to elevate the cause of an agriculture that restores its environs, it doesn’t offer many practical pathways for those looking to make a change in their own operations.

With this being said, the book remains a really worthwhile read. Regenerative agriculture may be a recent term, with its rising stars often being those who self-promote or capitalize on exceptional circumstances. But many of Call of the Reed Warbler’s protagonists have been seeking to reform agriculture for decades. He explores the Yeoman legacy—how an Australian miner’s understanding of water and geology is rehydrating landscapes across the globe. He delves into the life of Allan Savory, founder of the Holistic Management approach to stewarding resources and rangeland. Massy also features folks like Colin Seis, who developed the idea of pasture cropping at scale, among other unsung heroes in Australia who for decades have been using the whole-systems approach to management to restore the hydrology, species diversity, and overall profitability of their lands, long before their work was understood or celebrated as it is today.

Massy grounds his book in an ode to the intergenerational intelligence carried by its indigenous populations, who navigated their environs through complex songlines and an expansive sense of kinship. As Massy describes it, the aboriginal cosmology precluded the reductive, anonymous, and extractive tendencies that he says characterize modern agriculture—and unsurprisingly, their lifeway and worldview was swiftly compromised when Western agriculture expanded throughout Australia’s continent.

According to Massy, the aboriginal relationship did not observe the leave-no-trace ethic taken for granted by Western environmentalists today. In contrast, Australia’s original people practiced a land tending that was at times heavy handed, setting strategic fires that revitalized landscapes in their wake. By working within deeply understood cycles and seasons, their relationship with land was one of mutual benefit and reciprocity. Massy’s book offers the possibility that, provided we observe a few essential principles and go forth with great humility, even those generationally separated from our own indigenous roots can be in relationship with natural systems in a way that is emergent and beneficial for all life.

To Massy, the aboriginal Australian relationship with land and life indicates an understanding of what he calls a “complex creative system.” Here, Massy’s doctorate in human ecology and its attendant theoretical perspectives shine through. To Massy, a complex creative system is one that is self-organizing and emergent. It’s the native grasses that begin to grow in once-barren pasture due to improved livestock management, the natural springs that begin flowing again, and the wildlife that begins to populate landscapes once water, soil, and vegetation return—and that in turn introduces new seeds and microbes to add to the upward spiral of biodiversity.

Complex creative systems also lead to, and are reciprocally developed by, the people who find new sustenance in healthy landscapes—families that develop new ways of working together on the land, and companies that can hire new help and offer fair wages because of the growing capacity and productivity of their farms and ranches. In the long run, the best that farmers and ranchers of all stripes can do is to manage for emergence—the expanding fountain of resiliency and biodiversity that, as he quotes Aldo Leopold, implies a “capacity of the land for self-renewal.”

With self-organization and emergence as central themes, Massy structures his book using a series of principles that build on the ideas of holistic management as developed by Allan Savory. He contends that in order to make appreciable change on the landscape, we must regenerate the solar-energy function, the water cycle, and the soil-mineral cycles. We must also support dynamic ecosystems and develop our skills in the human-social dimensions of land restoration. It’s Massy’s view that all five of these principles must be addressed in concert if we are to address the growing ecological crises that threaten all of Earth’s life support systems.

But he pays special attention to the last dimension, the human-social layer of landscapes. Here, he celebrates people like Fred Provenza and Rowan Reid—minds he considers truly emergent—who have managed to grok the depth and directionality of plant-animal-fungi ecosystems. To Massy, the way we relate to our environments is rooted in our mental models about how change works and how nature functions. To find a better relationship, we have to consider natural systems anew.

Farmers and ranchers themselves may have the most familiarity with the topics explored in Charles Massy’s book and the most resonance with the expanded directions taken by him in his exploration of new-old ways of producing food, fuel, and fiber. But the book is a five-hundred-page tome that gestures at our latest and best exploration of an agriculture for the future. Some practitioners may appreciate hearing from one of their own, while others may feel alienated by the dismissive attitude Massy maintains when discussing practices that don’t fit his principles of complex creative systems. Still, this book will be appreciated by just about anyone interested in the connections between what they eat and wear and the integrity of ecosystems. It paints a picture of a necessary and attainable future of healthy soils and dynamic and productive ecosystems, serving as a guidepost along the way.

Ariel Greenwood is a grazier based in New Mexico who works with livestock to feed people and support ecosystems.