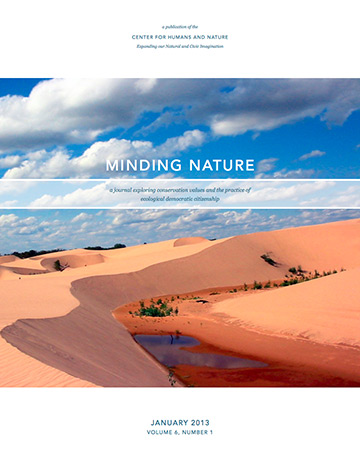 Our entire economic system is fundamentally dependent upon the functional integrity of natural and living systems that are losing patience with us. That is to say, these systems have a limited capac­ity to tolerate human extraction from them and excretion of waste products and by-products into them, and human economic activity worldwide is colliding with those limits.

October 29, 2012: This is the 83rd anniver­sary of Black Tuesday, the day that the stock market crashed in 1929, ushering in the Great Depression and the Dust Bowl years. As I awaited Hurricane Sandy, I walked Tess, my terrier, along the wall of Central Park near West 103rd Street, which was barricaded by city authori­ties to keep people safe from falling tree limbs.

Aldo Leopold (1887–1948) was an Ameri­can conservationist, forester, and wildlife ecologist who was deeply concerned about the speed and impact of industrialization on the natural world and human-nature relationships. Since human agency in the modern world is so profoundly shaped by economics, Leopold knew he would eventually have to come to terms with the premises and consequences of economics in order to address modern environmental challenges.

What does the group of Wall Street trad­ers focused on banks of computer screens have in common with the wa­tershed communities of South Ameri­ca’s Gran Chaco, the second largest ecosystem on the continent; the priests of Bali, where some of the ear­liest evidence of irrigation used in rice cultivation is found; the Arctic Circle’s indigenous communities of herders and hunters; and National Heritage Areas? A great deal.

All Sorts of Healing: Nature and Psyche Together

The fact that nature provides benefits and is healing to the human soul has never been a surprise to me. I grew up climbing trees, fishing, and mucking around in swamps. I was mostly on my own and happy to be outside, de­spite the dysfunction that blazed and simmered inside the family home.

I recall a particular late morning in my garden, one of those late fall days when the sky is vivid blue and cloudless; the air holds the crispness of impending winter around the envelope of sunny warmth. The image still so vivid in my mind was a rose bud—still tight in its emergence with the petal tips deeply blushed with pink. With more warmth and sun, this bud was so full of potential to be a fragrant blos­som.

Finding Ground for a Relational Ethic

The important attempt to broaden the scope of eth­ics to include non-human entities has been only partial­ly successful; this project requires more attention to cultural and social contexts and a stronger philosophi­cal rationale. Here, the concept of “place” can make a significant contribution.

The World Is Aging: Review of Lisa Eckenwiler, Long-Term Care, Globalization, and Justice

The world is growing older. During the past centu­ry, life expectancy has increased by nearly thirty years. By 2050, one-third of the world’s population is expected to be age sixty and over, and between 2000 and 2050, the percentage of people age eighty and over is projected to more than double. These changing demographics are predicted to create a “surge” in demand for long-term care.

More and more individuals and groups are questioning manifestations of the modernist paradigm—our economic structure, our urban and ru­ral planning strategies, and especially, our ethical sense. To these questions, I would add three more: How is it that we might re-envision the ways in which we inhabit our places, particularly the ways we inhabit our urban centers?