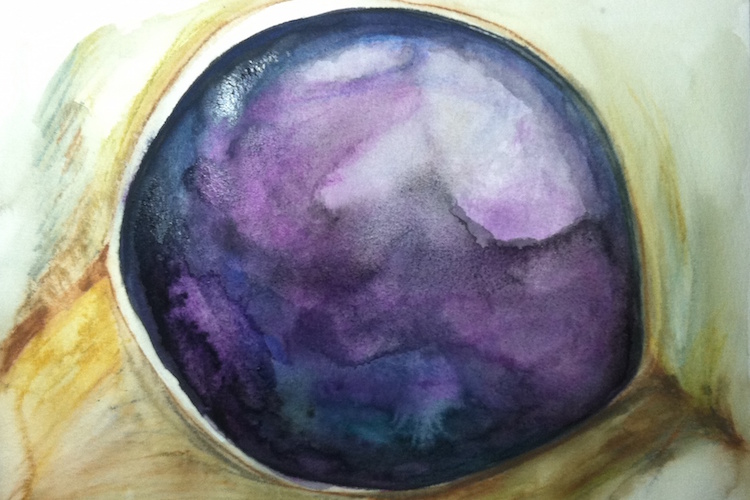 My eyes dart from street to sidewalk, down alleyways, and between buildings, looking for that familiar feathered lump: a migratory bird stuck in the city. I began bird monitoring in Chicago’s loop that fall.

As far as volunteer jobs go, it’s a tough one requiring early mornings and a willingness to encounter death—the antidotes to which are coffee and a defiant sense of humor. Despite the camaraderie of my fellow monitors and a steady source of caffeine, I was beginning to feel burnout. Mid-October brought a wave of bird deaths, to a point where I began dreading Fridays, my regular monitoring day.

One week before, I had circled the Sears Tower scooping up stunned songbirds for what felt like an hour. I watched several slowly dying as I put their paralyzed bodies into “live” bags that I later marked “dead.” When I finally quit the route and headed to work, my eyes were edged with cold tears; I blamed the harsh autumn gusts.

My first close contact with birds was as a child when I raised baby robins who my neighbors found untended in their backyard. (I didn’t know it then, but they were likely orphaned by an insane suburban obsession with lawn care and the pesticide-poisoning problem it perpetuates.)

Even as a kid, hardly able to cope for myself, I exercised a parody of parental care for my avian charges—protective to the point of obsession. That was when I first learned the privilege of caring for another. It’s a truly extraordinary experience to strengthen and support a tenuous life. Later on I worked in wildlife rehabilitation, “rescuing” and caring for birds of prey who suffered the serious side effects of suburbia. This work had a hardening effect as, day-by-day, beautiful young hawks would arrive in cardboard boxes, their strong bodies rendered powerless by pesticide poisoning; or nestling owls, orphaned, their mothers casualties of our reckless roadways. I’d seen the ugliest side of the odds these amazing animals are up against. But nothing can prepare a bird lover for the city streets during migration season.

So it’s 6 a.m. on LaSalle Street. I walk past a coffee shop; commuters are crowded around the counter. I pause when I reach an intersection. It’s late October in Chicago and I’m awake, but the idea of a warm drink in hand tempts me to turn back. I break away from a herd of pedestrians moving eastward, turn around and—he is ten yards ahead of me. With that same bewildered expression that identifies first-time tourists to the city, a large bird, with bulbous eyes and a three-inch beak, clings to the pavement. Pressed cuffs and polished shoes trod past, seemingly unaware. It takes me a second to react, so astonished am I to discover this large bird on the path I had just traversed. I rush forward and kneel before him, a penitent posture that is purely practical in this moment. We sit there, straddling the sidewalk for several seconds more, both of us, stunned.

I am accustomed to picking up sparrows and warblers in brown paper sacks, the school lunch sort. One of these small bags might fit this fellow’s leg. I recall a snippet of advice from a seasoned monitor: “I always carry a few paper shopping bags in case I find a bigger bird…” I glance fruitlessly into my pack and take stock: several sharpies, a net, notepad, labels, and a set of lunch bags. What was I thinking?

I suppose I assumed that if I ever saw a creature too large to be contained by these little lunch sacks, too small to be shadowed by curb or corner, everyone around would also pause—perhaps kneel—and certainly gasp or gaze—perhaps both—in awe. This was an awesome moment in the midst of a middling morning. Surely others would want to share it; surely someone would offer to assist; the ceaseless motion of the city would probably stop. Naïveté. Idealism. Here I was, kneeling before a beautiful being, the only someone who seemed to notice.

With no means for transporting the bird, I opted to move off the sidewalk into the entryway of a closed restaurant while I outlined a more productive plan than admiration. I called Barbara, a fellow monitor, more experienced and much better prepared, and explained my situation. “Hold on—I’m headed your way!” she reassured me. Cradling my sudden ward, I shifted into the corner of the doorway to wait.

The bird sat absolutely still in the hammock of my hands; the only signs divulging life were the glimmer of his shiny black eyes and the steady throb of his heart.

It must have looked like a strange scene to anyone who bothered to glance down. There I sat, lodged in the corner of a doorway, cross-legged in my dress pants, gym shoes, and an oversized fall coat, cradling a sleek brown-black feathered being.

I examined him carefully, wracking my mind for his name, for some sense of his identity, family, place. With his relatively long beak, he looked like a shorebird but lacked webbing between his toes. I marveled at his glamorous eyes—inky black, iridescent, angry (or afraid? or equally amazed? or some other emotion for which there is no name)—gleaming like pearls just pulled from their watery home. I was so absorbed in my study of this feathered being that some time passed before I noticed a slight arc had evolved in the pedestrian path moving past where I sat.

City streets are stigmatizing spaces. The closer you are to them, the more you realize this. I looked up at the line of people walking by, their heads turned away or raised above, intent on a distant point. This decisive disregard made me uncomfortable. Sitting on the street, it didn’t seem to matter who I was or what I was doing. I played a role all too familiar here. I was in a position to be ignored. Suddenly cynical, I was no longer surprised that such an unusual bird could go unnoticed. We walk past suffering and need everyday, all the time. The easiest way to cope is to believe that it’s unremarkable.

My phone buzzed, and I felt a wave of relief. Barbara’s cheery voice came through: “I’m on LaSalle at Madison. Where are you?” I waved from the entryway. As she approached, before I could even get the question out, she exclaimed, “A Woodcock!”

I looked back at my new acquaintance, eyes wide: so I knew this bird after all. I’d heard of them from birders and biologists and read about them in books. But it was very different to behold (and hold) him in life. “I didn’t know what to do,” I offered somewhat sheepishly as Barbara dug a large paper bag out of her pack. It was a deeper confession than I’d intended.

I still don’t know what to do. I’m not referring to the larger migratory birds who get caught up in our built environment. (I now carry grocery bags and await the chance to hand one back to a gentler world, alive, again.) But for the millions of birds—living beautiful lives, exchanging sweet songs, carrying long lineages—who must contend with the dangerous dreams we’ve built around ourselves, I don’t know what to do. And I don’t know what to do with the weight that gathers in the bottom of my lungs when I think of this terrible loss that we complicity urge onward as we sit in our great glass towers and gaze into new worlds while this one that holds soil and sea and all the loving, lively elements from which we grew is recast in myriad ways untraceable and cruel.

So, on Thursday night, I set the alarm for 4 a.m., knowing that in the morning I’ll be wending along the busy, brutal streets of this city in search of a reason to kneel.

Katherine serves as Managing Editor and leads the Center’s Questions for a Resilient Future.