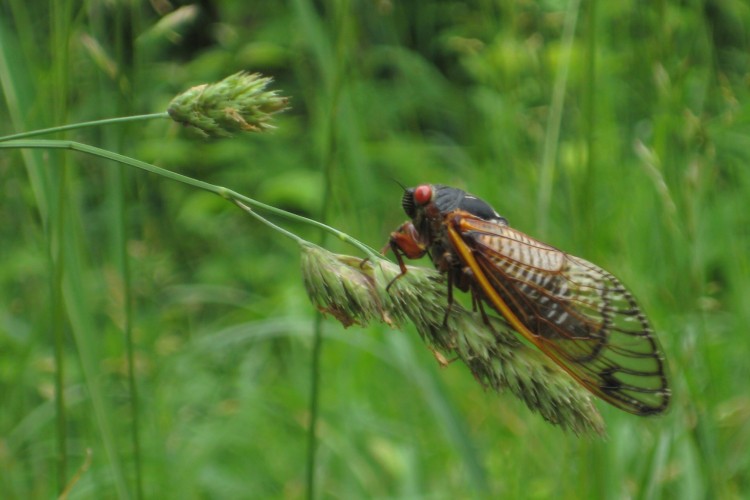 The first adult I saw was upside down, his wings gluing him to the wet railing of the deck. I offered my pen and six strong legs wrapped round it. He righted himself and clung to the pen as I brought it up to my face and looked into his fearless unblinking eyes, a dull coral red with a brown pinprick just off-center. His body was a mossy jade, and his wings the most delicate stained glass, with the leading done in pure gold.

All week I’ve watched cicadas flying and cicadas dying as we labor in my brother Henry’s fields beside the banks of Walnut Creek. Now and then cicadas dropped into the thin trickle and were swept away with no sense of loss. In passing they fly on.

After the afternoon shower we so desperately needed, the evening cleared. The humid air diffused the horizontal searchlight of the setting sun, and the world shimmered softly, with a few diamond sparkles shooting from the drops still clinging to the cedars.

As soon as the rain let up, the cicadas kicked in again, climbing back up to the tippy-tops of all the trees and singing, clicking, buzzing, humming like there was no tomorrow.

And it’s true, that there were far more yesterdays than tomorrows for them. After 7, 13, or 17 years underground, safe from predators, the nymphs crawled up out of the earth and were briefly, beautifully, dangerously in our world of light.

The cool air of evening calms the cicada song to a background buzz accented with a conversational clicking and clacking that echoes from the tree tops—cicada pillow talk, I imagine. Cacophony yields to euphony.

I am convinced that if the poet Wallace Stevens had worked outdoors on an organic farm rather than indoors at the Hartford, he would have written “13 Ways of Listening to Cicadas” instead of “13 Ways of Looking at a Blackbird.”  Take my adaptation as an example of imitation being the sincerest form of flattery—or a sign of insanity triggered by the cicadas’ ear-splitting buzz.

Thirteen Ways of Listening to Cicadas

I
Among the twelve acres of drought stricken fields,
The only moving thing
Was the eye of the cicada.

II
I was of many minds,
Like a tree
In which there are thousands of cicadas.

III
The cicadas droned in the summer afternoon.
It was a small part of the big picture.

V
I do not know which to prefer,
The beauty of inflections
Or the beauty of innuendoes,
The cicadas whirring
Or the silence just after.

VI
Cicada wings fill the long window
With barbaric glass.
The shadow of the cicadas
Cross it, to and fro.
The mood
Traced in the shadow
An indecipherable cause.

VII
O women and men of the Midwest,
Why do you imagine insect-free lives?
Do you not see how the cicada
Lives and dies,
Giving life?

VIII
I know noble accents
And lucid, inescapable rhythms;
But I know, too,
That the cicada is involved
In what I know.

IX
When the cicadas’ spent bodies finally fell to earth,
It marked the edge
Of one of many circles.

X
At the sight of cicadas
Flying in a green light,
Even the bawds of euphony
Would cry out sharply.

XI
A farmer rode over his fields
In a Ford tractor.
Once, a fear pierced him,
In that he mistook
The shadow of a storm cloud
For a swarm of cicadas.

XII
The river is moving.
The cicada must be flying.

XIII
It was evening all afternoon.
It was raining
And it was going to rain.
The cicada clung to my pen
And righted itself
As I wrote.